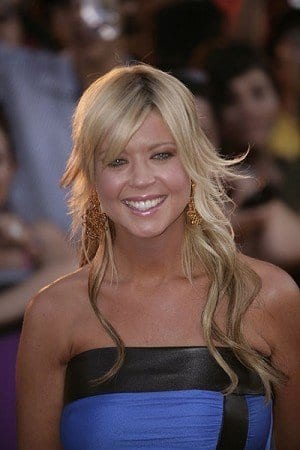 Tara Reid, and those other guys from the American Pie franchise, hit the red carpet Wednesday in Australia to premier the newest installment, American Reunion.

In this installment, Tara Reid resumes her role as Vicky Latham. Seann William Scott comes back as Stifler, who tries to convince Jim (Jason Biggs) to have a fling with a teenage girl he used to babysit. Oz (Chris Kelin) reconnects with his ex Heather (Mena Suvari), but she has moved onto someone new.

The film premiered in Australia this week, but we won’t be able to catch it until it opens in theaters April 6.

Everyone in the cast is growing up, but Tara Reid wins the award for best transition into adulthood. The 36 year-old actress was known for her party-girl behavior, bleach blond extensions, and an infamous wardrobe malfunction at P. Diddy’s birthday party in 2005.

Does this polished new look mark a new beginning for Tara Reid? She was reportedly the lowest paid cast member in American Reunion, but after her stunning red carpet appearance, maybe it’s time to give Tara Reid another look.