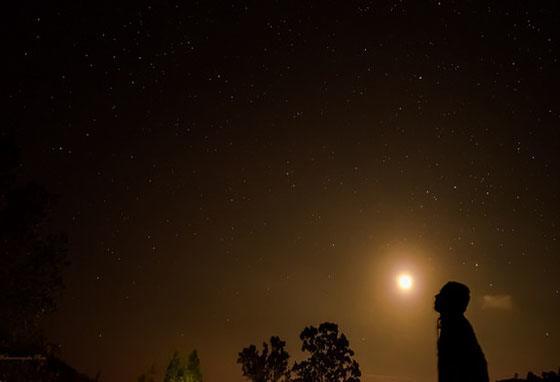 Stargaze planets visible to the eye before turkey day

If you can brave the crisp cold of November evenings, step outside sometime between now and Thanksgiving to get some star gazing done and look at some planets. There are five planets that are visible to the naked eye while Thanksgiving star gazing, depending on their positions. These planets are Mercury, Venus, Mars, Jupiter, and Saturn. Of the five, three are currently visible to the naked eye during a stargazing session, and only at certain times of the day.

Also called the “Morning Star,” Venus glimmers brightly at the end of the night and just before sunrise. Venus rises four hours before the end of the sun and is located around 30 degrees about the southeast horizon. Venus is the second planet from the sun and is the brightest object in the night sky after the moon. A layer of clouds made of sulfuric acid obscures the surface of the planet, and Venus’ atmospheric pressure is 92 times greater than Earth’s.

During the later hours of the night and at dawn Mars becomes visible while Thanksgiving stargazing. The Red Planet is decorated by the brighter Jupiter and Venus which hang above it in the sky. It is significantly dimmer than the other two and has a reddish appearance. Mars is a terrestrial planet fourth from the sun with an atmosphere made mostly of carbon dioxide. The largest dust storms in the solar system can be found on The Red Planet.

Also in the period of time at the latter end of the evening and dawn, Jupiter can be found high in the southeast above Venus. Jupiter, the Gas Giant, is two and a half times bigger than all of the other planets in our solar system combined. It is the fifth planet from the sun and has 67 known moons. While Venus still trumps Jupiter’s brightness by far, the Gas Giant comes in as the fourth brightest planet in the system.

Leave your astronomy gear behind when you go out to take a look at Venus, Mars, and Jupiter. All you need is your open eyes and an open mind to appreciate the rather extraordinary view that the night skies have for you during some Thanksgiving stargazing.

You should also read: Hiking Tips For Mt Pilchuk in Washington

Previous ArticleMentally a Freshman, but physically a JuniorNext ArticleStudy Abroad in Shanghai