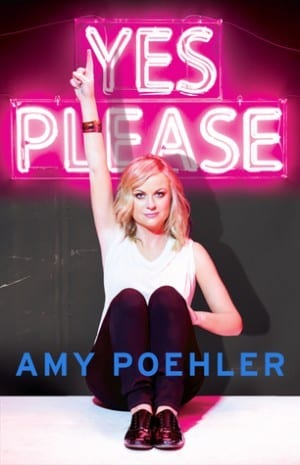 Amy Poehler’s voice strikes me as sincere, intelligent, witty, and engaging. She is highly conscious of her role as an entertainer who is creating a book about herself: “I have the Angelina Jolie of vaginas. And there is your pull quote, editors” (32).

Poehler’s career has survived at least two wars and the 9/11 attacks. Amy Poehler stated that after the September 11, 2001 attacks, “It felt like America might not ever smile, never mind laugh, again” (135). But it did. Amy Poehler performed hilarious skits on SNL with Tina Fey during the presidential campaigns of 2008.

If Yes Please reflects Amy Poehler as a person and comedian, then the book has given me a lot of respect for her because she shares the guilt she felt over the way she’d indignantly handled the negative reaction over a skit making fun of a girl with cerebral palsy. She lived with this guilt for years until she finally gathered the courage to apologize. I thought it was brave of her to come out and admit the crummy way in which she’d reacted to the backlash.

In addition to stories about her way to becoming the SNL star that she is now, Amy Poehler shares moments from her childhood. One of my favorite parts is the section about her “plain” looks:

“I had already made a decision early on that I would be a plain girl with tons of personality, and accepting it made everything a lot easier. If you are lucky, there is a moment in your life when you have some say as to what your currency is going to be. I decided early on it was not going to be my looks” (20).

Amy Poehler also points out the double standards that mothers and teenagers are held up to. With mothers, stay-at-home-moms and working mothers are made to feel bad for either not working or for not spending enough time with their children. For teenagers, girls straddle the line between “virgin” and “slut”, a game that no one can ever truly win. Amy points out all of these frustrating standards with a light and humorous tone, without sounding preachy or angry.

The layout of Yes Please by Amy Poehler is beautiful, consisting of splash pages between each chapter with short and snappy lines, such as “Do whatever you like,” and “Short people do not like to be picked up”. I also enjoyed looking at photos of her past, which are sprinkled throughout the book but do not dominate the discourse.

Thanks for reading! Find out more about Yes Please by Amy Poehler: