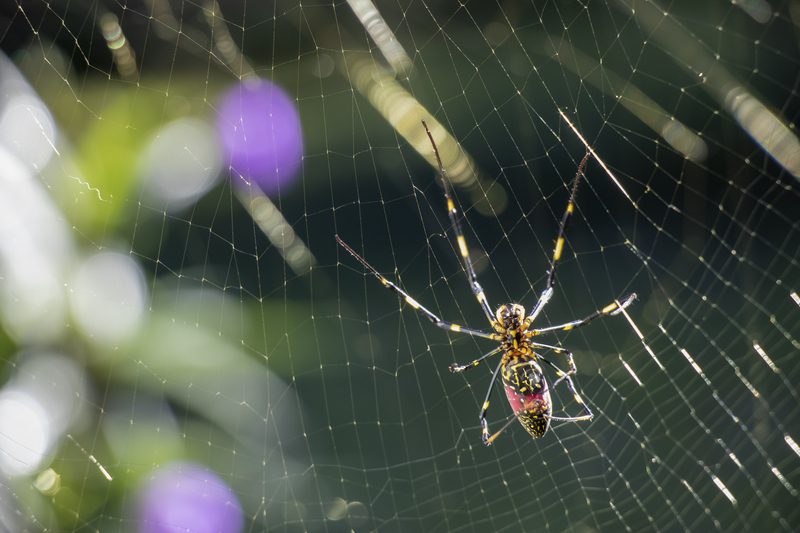 There have been rumors spreading about a spider called a Joro spider. Joro spiders, also known by their biological name “Trichonephila clavata” first invaded and spotted in Hoschton, Georgia, around 2013 and have been spreading since then across the southeast. They are vivid yellow, blue, and red and can grow 3 inches large with webs nearly 10 feet deep. They’re also completely safe. Joro spiders are native to Japan, but they have also been found in China and Korea. They most likely hitched a ride on cargo containers to the United States. The temperature in much of the United States is comparable to that of Japan, which is one of the reasons why joro spiders could make their way up the East Coast from Georgia. While joro spiders eat (and are likely eaten by) native species, they do not appear to pose a threat to ecosystems or the economy. Because Joros’ eggs can withstand the harsh temperatures of more northern regions, Hoebeke believes the spiders will migrate beyond the Deep South to other parts of the country.

How migration of Joro spiders’ occur?

These spiders can ride on shipping containers, cars, and luggage, but they can also get around on their webs. Joro spiders overwinter as eggs in a silk egg sac made of paper. Spiderlings emerge in Japan in early June and go unseen for the most part. In a method known as ballooning, they fly on a strand of silk. They expand their range by parachuting into new places. It’s how Joro spiders that have just hatched spread. This spread has been noticed tremendously in various parts of the world with significant imaging and proofing.

There have been arising many questions regarding the venomous properties of Joro spiders. Studies have shown that Joro spiders are technically venomous, but don’t be alarmed unless you’re an insect. According to Axios, they are harmless and their fangs aren’t even big enough to pierce human skin. They will only bite a human or a family pet if they are aggressively restrained. Joro spiders do not pose a hazard, and there is no evidence that they are damaging to the settings in which they have spread. Nonnative invasive species that cause harm are the most problematic, generally due to a lack of predators to keep their populations in check. This appears to be the case with Joro spiders. However, no significant change in the food web or the ecosystem has been noted yet, causing no harm to the environment and its balance.

Recent studies have shown their significant benefits in the fields of agriculture. According to the Associated Press, gardeners were concerned that their webs would harm local spiders and pollinators when they took over north Georgia last year. Joros are likely large enough to take on large pollinators caught in their webs, but those insects may be a minor part of their diet. On the other hand, they could aid native spiders who rely on the Joro’s web for scavenged food. However, there is evidence that they compete with native orb-weaving spiders. Stink bugs, which cause crop damage and swarm in homes, are eaten by these joro spiders assisting in pest management without pesticides. They’re excellent predators. They’ll eat insects like yellow jackets, stink bugs, and mosquitoes that you don’t want around. They also don’t seem to be displacing any local spiders. They might help introduce a better method to protect the crops instead of using insecticides and pesticides.

Joros appears to be a helpful bug as well. Brown marmorated stink bugs, a significant agricultural pest that native spiders won’t eat, are what they’re eating. They are proven effective in protecting the crops and hence enhance yielding. It can act as a natural soldier to the crops protecting them from harmful insects and pests. They might look dangerous in shape and size but can be considered beneficial in various sectors such as agriculture. Researchers are still in line to uncover more of its significance.

For joro spiders, no control techniques have yet been devised. Individual spiders can be manually eliminated if control is wanted, either by hand or by striking them with a stick or other instrument. Before the spiderlings hatch, egg sacs found in the fall and winter can be eliminated. Biocontrol agents have not been researched; however, they are unlikely to be possible due to the risk of affecting related native species. Pesticide control is not advised at this point.