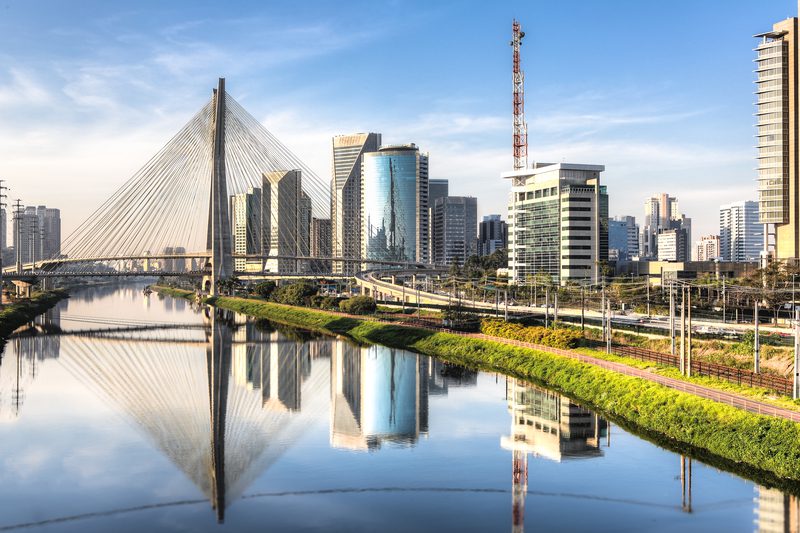 If you were to picture Brazil as a float in a Carnival parade, Sao Paulo would be the fast car underneath it. It is an industrial and fiscal monster that pushed Brazil’s economy forward, but don’t think that it doesn’t know how to have fun. As the largest city in South America, Sao Paulo is as diverse and vibrant as New York or Tokyo. A few years back it had the highest crime rate in Brazil, however in recent years it has transformed into one of the most vibrant and underrated destinations in the country.

The city, which is fondly referred to as the “Cidade da Garoa” (city of drizzle), is known for its unreliable weather, its cuisine, traffic congestion and its endless jungle of skyscrapers. Studying abroad in Sao Paulo is overwhelming, intense, gritty and spectacular. Students should buckle up for a ride in one of the greatest cities on Earth if they choose to study abroad in Sao Paulo.

Paulistanos, as São Paulo’s residents are known, have a wealth of cultural activities at their fingertips. Therefore, the students in the city do too! The city has more than 100 museums and 300 cinemas, as well as an international film festival that takes place each year. Among the city’s most famous museums is the Pinacoteca, the oldest museum in São Paulo, which has around 9,000 artworks. It is situated in the centre of the old city and surrounded by the Jardim da Luz garden.

Another is the Museum of Art of São Paulo, which displays famous artworks by Pablo Picasso and Vincent van Gogh, among others. The building is easily recognisable for its iconic design, courtesy of modernist architect Lina Bo Bardi. Outside the museum walls, the city also has a thriving street art scene, with the Beco de Batman (Batman’s Alley) displaying the city’s highest concentration of street art murals.

Modern São Paulo has been shaped by immigration. The city experienced a number of migration waves from the mid-19th century to the start of the 21st, with populations relocating from across Europe and Asia. Today, São Paulo has one of the most ethnically diverse populations in Brazil and is known for its cosmopolitanism. It has the largest Japanese population outside of Japan, which is mostly concentrated in the Liberdade neighbourhood, as well as a strong Italian heritage, particularly in the neighbourhoods of Bixiga, Brás and Mooca.

São Paulo continues to champion immigration today and is at the forefront of a Brazilian initiative to welcome refugees, helping these individuals learn Portuguese and find work in the city. Studying in São Paolo is therefore a highly multicultural experience, where students will experience a wealth of cultures beyond just that of Brazil.

It’s perhaps inevitable that such an ethnically diverse city would give rise to a rich street food culture. Street markets have continued to thrive even as supermarkets spread across Brazil. The Municipal Market, a historic building stretching more than 12,000 metres, is a popular food market selling a wide range of fresh fruits, vegetables, fish and spices.

Cheese-filled pastries, churrasco (Brazilian barbecue) and the city’s famous mortadella sandwich are among the local delights that can be found at one of these markets, but visitors are just as likely to come across Asian street food like imagawayaki, a sweet treat from Japan. São Paulo is home to an array of excellent restaurants, including DOM, currently the only restaurant in Brazil with two Michelin stars (this is unlikely to be a student haunt). You are more likely to check out the thousands of pizzerias and sushi restaurants, thanks to Sao Paulo’s diverse population.

It should come as no surprise that São Paulo has the non-stop energy that is characteristic of a sprawling metropolis. The sheer size of the city can be daunting initially, but this is also a key aspect of the city’s appeal. Many Paulistanos work in high-flying roles within the city’s main industries, and so studying in São Paolo means being right in the heart of Brazil’s fast-growing economy. It is common to hear that the people in São Paulo work while the rest of Brazil relaxes. But students shouldn’t be scared of the serious façade– when Paulistanos are not working, they are dancing, eating, and basking in the culture of the city. The nightlife in Sao Paulo is as intense as it gets, which makes going out to experience the town a total must-do.

In recent years, the influx of people and rising wealth has led to an increasingly vibrant nightlife scene. Every evening a vast number of bars and nightclubs open their doors, many of which remain open late into the night.

The city is a venue for a number of high-profile music festivals, such as the world-famous Lollapalooza. As a city that welcomes all visitors, São Paolo is an enthusiastic host of one of the world’s biggest Pride parades, which also featured in popular Netflix show Sense8.

Sao Paulo is dangerous. If you choose to study in the city, avoid areas where students are not located, try to avoid walking alone at night, watch out for your belongings and make sure not to trust everyone you meet and you should be safe. It is also incredibly busy. For example, Friday evenings are a commuter’s worst nightmare in Sao Paulo, when all the tailbacks in and out of the city extend for a total of 112 miles, on average, according to local traffic engineers, and as long as 183 miles on a really bad day. That said, you are unlikely to be driving in Sao Paulo, so stick to the public transport and you will be fine!