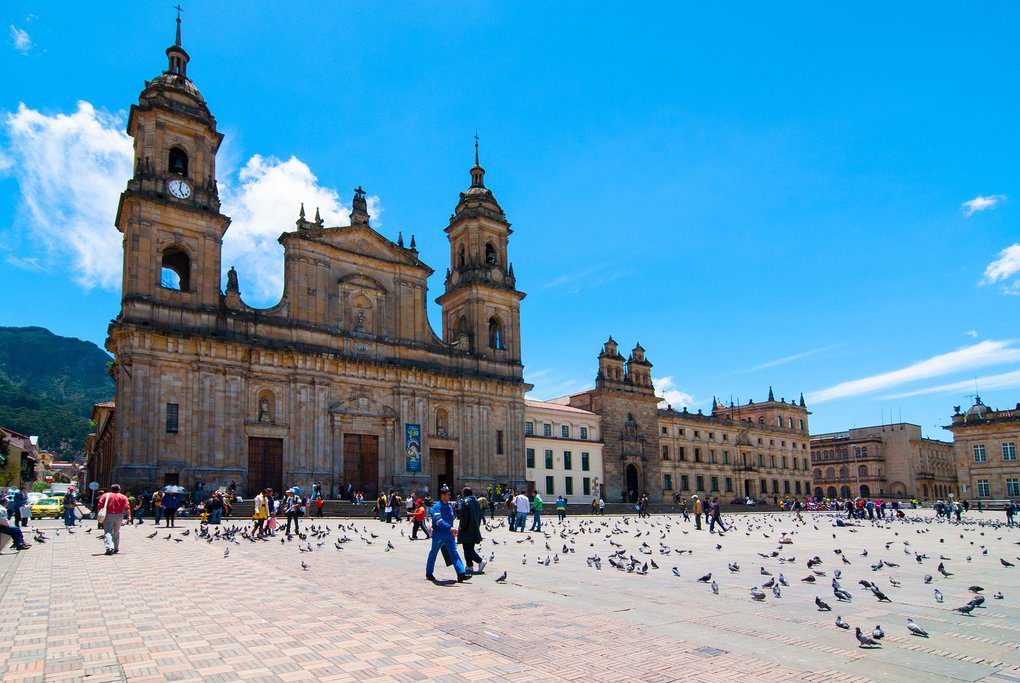 The beating heart of an intriguing country, the towering skyscrapers of Bogota’s businesses contrast with its historic colonial architecture, enticing visitors with its diversity. Add to this some of the best food and nightlife in Latin America, and you surely won’t want to leave by the end of your programme.

Colombia in the past few years has more than recovered its reputation as a safe destination and tourism is booming. It’s an excellent place to choose to study Spanish, too, as the Colombian accent and pronunciation is easier to understand than many other South and Central American countries, particularly for first-time learners.

There are also tons of museums to explore: as with many capital cities, Bogota holds the key to Colombia’s culture, in the form of its Gold museum, the Botero museum, and the Colombian national museum. There’s certainly a lot to be gained from studying in Colombia’s capital.

Studying in Colombia will teach you much more than just what you learn inside the classroom. It’s a whole different culture, another language spoken in the streets, and a rich Latin American lifestyle to get used to.

Learn Spanish to immerse yourself in Bogota culture

One of the key ways to immerse yourself in Colombian culture is by learning the Spanish language, which will help you to get under the skin of life in Colombia and give you a new skill that will be both professionally useful and personally enriching.

There is support if you need it

Seeing as Colombia’s culture is quite different from the typical Western lifestyle, it’s understandable when students feel a little overwhelmed by it all. Culture shock is totally normal, and it will pass, but it’s useful to have a basic framework for dealing with these difficulties.

Some organizations have a dedicated member of staff focusing on student life, while many others have the advantage of simply having a cohort of students all going through the same experience at the same time. Having others to talk to about how you’re feeling is useful when going through culture shock.

Bogota’s leisure activities have something for anyone

Bogota is a late-night kind of place. Whether it’s eating, drinking, or dancing salsa, you’ll find the streets alive until the early hours of the morning. Salsa is a huge part of the culture, and you’ll find it in almost any club you visit.

And of course, coffee is an integral element of Colombian life, despite much of the best stuff being shipped off for international export. A cup of tinto and a leisurely chat in the square is a favorite pastime for many Colombians. You can easily spot the locals dotted around across the benches of almost any open park or crowding the street-side tables of cafes.

Interaction with other international students

The government and the universities are actively making efforts and taking steps to put Colombia on the forefront in the field of academics. Universities in Bogota have alliances with international institutions that bring in students from multiple countries around the world.

Meeting students from different backgrounds and cultures makes the experience of an international student even more enriching. You get to meet people with a lot of varied interests. Studying here provides a medium to interact and learn about a variety of cultures and languages as well.

The weather may not be what you imagined.

It’s cold in Bogota. You would be forgiven for thinking that moving to South America would mean sun and heat, especially since Bogotá lies just 319 miles from the equator. However, because it’s a mountain city, the climate in Bogotá stays generally cool with average temperatures staying around 14 degrees Celsius year round.  This means it is essentially autumnal weather all year round. For you, this means wearing sweaters, scarves, and boots all year.

It will rain every day. If you decide to study abroad in Bogota, make sure to throw your rain poncho over whatever you’re wearing and put a travel umbrella in your bag. Because you can never know when the rain will start, but it will start. Living in Bogotá means always being prepared for the weather to change, and not being surprised when it’s sunny and raining at the same time. Don’t be discouraged though, it will usually only last 10-15 minutes and is usually never more than a sprinkle. Not quite enough to really seek shelter, just enough to be annoying.