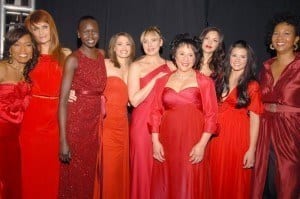 People throughout the country are being encouraged to clad themselves in red to show their support for hear disease, which is also the number one killer of women. National Wear Red Day falls at an apt time given that February is also American Heart Month.

The day hopes to promote the American Heart Association’s red dress symbol, asking everyone to adorn their most favorite red garment.

“A sudden heart attack leaves so much behind,” Subrizis stated.

National Wear Red Day for Women was initiated in 2002.