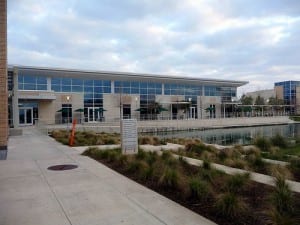 The Lone Star College stabbing suspect has been identified as student Dylan Quick, 20.

Quick allegedly ran to various buildings at Lone Star College Tuesday, wielding a knife and stabbing multiple people, particularly in the Health and Science Center and technology building. Fourteen people were wounded, and two people were in critical condition.

At least four of the victims were transported by Life Flight to hospitals.

Quick has been charged with three counts of aggravated assault with a deadly weapon, according to the Harris County sheriff’s office. Each of these counts carries a $100,000 bond.

A witness told KHOU that Quick aimed for the neck and face of victims as he stabbed them.

Reportedly, students and faculty were able to tackle Quick before police and medical personnel arrived.

Quick is a student at Lone Star College Cy-Fair. He was questioned for six hours Tuesday until about 9 p.m. by the Harris County Homicide Division. He was then taken to the Harris County Jail. He told detectives he was planning the attack and had fantasized about stabbing people since he was a child.

Two of the victims are still in critical condition, and the rest are in good condition or have been released.

Lone Star College administration put the campus on lockdown as soon as they knew about the incident. A text sent out to students said, “Seek shelter now. If away, stay away.”

In January, two people were shot at a different Lone Star College campus. Both victims survived the incident, and one was charged.