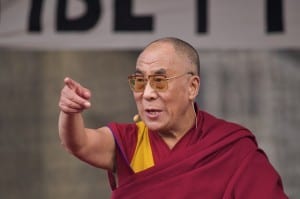 The Dalai Lama made an appearance at San Diego State’s campus in hopes raising awareness for his protest against China’s rule over Tibet.

The appearance came just a year after 30 Tibetans lit themselves on fire in protest. Chinese authorities blame the 20 deaths that ensued on the Dalai Lama, which were done by members of the Buddhist clergy. The Dalai Lama on the other hand blames China’s harsh rule over Tibet and that frustration led to the suicides.

The Dalai Lama, who won the 1989 Nobel Peace Prize, went on campus and spoke of the climate change, “This blue small planet is only our home, no other planet so far,” he said. “This is our planet, our home. We have to take care of it.” Around 4,700 hundred people were in attendance.

The Dalai Lama also spoke of “genuine peace” in these trying times through education, awareness and understanding inner working, “Genuine peace must come from inner peace, not out of fear, not out of superficial appearance,” he told the audience.

Although the focus of the lecture and appearance was for spiritual purposes, the Tibetan issue looms large overhead. Chinese officials are usually enraged by an appearance of the Dalai Lama in the United States. He commented at a news conference that although China has voiced no response to his appearance, the non-response is not an indication that the relations that forced him into exile are improving.

After San Diego and Long Beach, the Dalai Lama will speak in Chicago at appearances set for April 25 and 26.