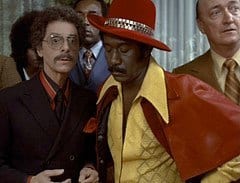 The actor left a successful photography business to pursue acting

A representative for his daughter, Amy Arbus, confirmed the death.

“At 95, doctors didn’t want to do surgery and Allan didn’t want it at all,” said Costello Arbus, an actress who married Arbus in 1976. “He just slowed down…just got weaker and weaker and was at home with his daughter and me.”

Arbus appeared on numerous TV shows in the 70’s and 80’s, including “Starsky and Hutch” and “Matlock.” But his most famous role was the zinger-flinging psychiatrist that treated soldiers’ wounds on “M.A.S.H.”

He played his role so well, some of his colleagues thought he actually had medical experience.

“I was so convinced that he was a psychiatrist I used to sit and talk with him between scenes,” Allan Alda, who played Hawkeye in the show, said in an interview with the Archive of American Television. “After a couple months of that I noticed he was giving me these strange looks, like ‘How would I know the answer to that?’”

“He was so authentic in the role it was hard to believe that he wasn’t that person,” Alda said.

Allan Arbus was born on Feb. 15, 1918 in New York City. He was the youngest of two children and the son of a mutual fund trader (his father) and an English teacher (his mother).

He graduated high school at age 15 and enrolled at the City College of New York. He left college and started working at Russek’s, where he met his future wife Diane Nemerov. They married in 1941 and later opened their own successful photography studio. He later left the studio to pursue acting.

Allan Arbus last appeared in the HBO show “Curb Your Enthusiasm” in 2000.

He is survived by wife Mariclare Costello and his three daughters: Arin, Amy and Doon.