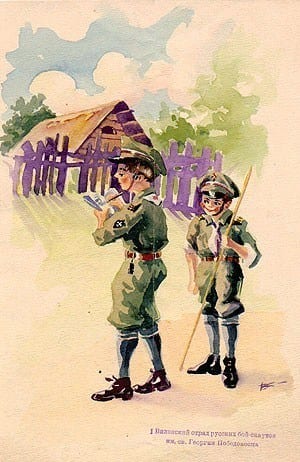 Several Eagle Scouts have returned their hard earned badges to The Boy Scouts of America after they have reaffirmed their stance for excluding openly gay people to join or serve as troop leaders.

The Boy Scouts have held their anti-gay policy for over 100 years and recently reaffirmed its policy continuing its ban on gay members. The decision has received backlash not only from the LGBT community but their own members who have turned their back on the organization.

After Boing Boing writer Maggie Koerth-Baker posted a letter her husband sent to the organization on the site, the gesture has paved the way for others to follow in suit.

In the letter, former Eagle Scout Christopher Baker writes, “Today I am returning my Eagle Scout medal because I do not want to be associated with the bigotry for which it now stands. I hope that one day BSA stands up for all boys. It saddens me that until that day comes any sons of mine will not participate in the Boy Scouts.”

Since the letter has been posted Maggie Koerth-Baker has been updating her husband’s story and other scouts have sent similar letters to the Boy Scouts renouncing their medals.

Martin Cismar, former scout from Texas writes, “I’m not gay. However, I can no longer in good conscience hold this badge as long as  the BSA continues its policy of bigotry…I don’t want to be an eagle scout if a young man who is gay can’t be one, too. Gentleman, please do the right thing.”

The organization was contacted and spokesperson, Deron Smith said the decision represented “a diversity of perspectives and opinions.”

Smith further commented, “Scouting represents millions of youth and adult members in diverse communities across the nation, each with a variety of beliefs about this issue. While a majority of our membership agrees with our policy, no single policy will accommodate the many diverse views among our membership or society. Although we are disappointed to learn of anyone who feels compelled to return his Eagle rank, we fully understand and appreciate that not everyone will agree with any one position or policy.”