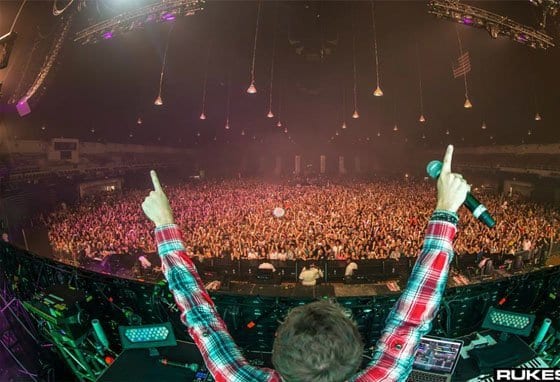 We detail Zedd’s True Colors Tour during its DC stop

Anton Zaslavski a.k.a Zedd is a Russian-German music producer and EDM artist known for his hit singles – Stay the Night, Clarity and Spectrum — started a tour and we experienced Zedd’s True Colors Tour at the DC stop in North America.

For starters, Zedd’s concerts is well-known because of his stunning visuals and synchronized lights. They are very impressive and I must tell you, it’s not an easy thing to do –creative thoughts also went into them to insure they reinforced the themes in the music and lyrics.

I was able to watch his Moment of Clarity Tour last 2013 and nothing changed except for the fact that it only gets better. Given his classical training in piano since the age of 4 and his drumming experience in a heavy metal band with his brother, there’s not very much room for debate when it comes to Zedd’s musical ability. So stop the stereotypes that DJ’s only know how to push buttons, okay? Good.

Caption: Throwback to 2013, Moment of Clarity tour in Manila, when Zedd helped the people of the Philippines by giving free tickets to his concert to everyone who will bring goodies for all the people affected by the typhoon. Thoughtful Zedd is my favorite Zedd.

True Colors tour in Washington DC was held in DC Armory — Alex Metric, a British musician and producer, started off the show with his very chill set — just right in time to warm the crowd up followed by What So Not, an Australian producer, which basically played some cool beats making the crowd pumped up because of his colorful visuals and hip sound. For North America tour Zedd was able to bring different special guest every night and for this particular night he brought the iconic Tommy Trash on the stage which made the experience extra superb.

It was also the first time for moombahton and electro producer Dillon Francis to join True Colors tour as he will be with Zedd for the rest of October. Dillon Francis made the crowd go crazy — laughing and dancing the whole time.

When Zedd finally hits off the stage, it was really a surreal moment. He never disappoints. With the mixture of his songs from the MoC album to his collaborations with Selena Gomez and Ariana Grande to his latest songs from his latest album True Colors – truly he proves once again how talented and incredible he is as an artist.

To be perfectly honest, it is his body-language that connects him to his audience. I love how he smiles throughout the show, as if he was part of the crowd and inviting everyone to join the fun and forget everything even just for one night.  At times he’s proud, raising his arm in the air with all his might; other times he’s humble, looking up at the sky as if indulging every moment that has been happening in his life.

But his best move is probably by far my favorite —  Wiping the sweat off his brow with his arm. That’s how you know that he’s an honest-to-goodness professional just doing his job like a normal person. Even if it does happen to be the coolest job in the world.

True enough, if you worked hard on something you love and giving up has never been your option – all your sacrifices will be paid off. And Zedd is the living testimony of it all.

You will also like: Dear Boy: A SoCal Band with London roots