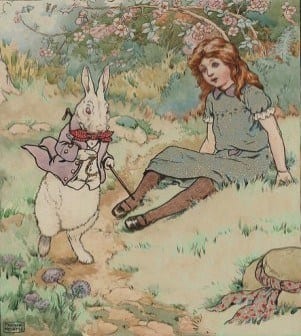 Some of the Subtext in Lewis Carroll’s Stories of Alice

In honor of the great Charles Dodgson’s – better known as Lewis Carroll – birthday that occurred this month, I thought it fitting to write a little bit about how sometimes nonsense can make more sense and how fiction can tell so much about reality and how we perceive the world we live in. In Lewis Carroll’s most famed novels we are taken on a journey with a young girl named Alice who finds herself in the upside down world of Wonderland. The characters, and things that she encounters there make no sense at all to our young heroine, but is there another layer to the whimsy of how Alice functions in Wonderland?

The Mad Hatter and Company

One of the most well recognized characters in Wonderland, and the one that seems to have quite a following today, may not be what most of the fans think him to be. The Mad Hatter is every contradiction of the proper Victorian gentleman, or is he? There are many references to how the Mad Hatter and his company behave rudely to Alice, even suggesting she “cut her hair”. This may seem as a simple rude remark to make, but there may be something deeper. In tea society it was common for women to host the tea party, could it be that this was, to a more patriarchal coffee drinking British gent, a slap in the face? So, when the Hatter tells Alice to cut her hair, is he then making a gender statement rather than one of fashion?

One of the more confusing parts in Alice in Wonderland is the caucus race and all of the wet animals. The scene begins with a very dry lecture by the mouse, but it is simply not enough to dry the animals off. Again, there is much of Lewis Carroll’s academic side that peeks through on this scene. Lewis Carroll was a man of logic, a mathematician, and was very often in the academic circles. It is certain that the constant reiteration of the circular logic in politics, culture, and academia were forefront in his mind. It must have not only seemed strange to a child like Alice, but also childish to a man so immersed in a world where nothing is really real. People talk to hear themselves talk. They discuss nothing at all of import, and nothing is really created only we all are back where we started from.

It’s All a Game

One of the most often overlooked subtext in the Through the Looking Glass novel is that it is really all just a game. every character in Wonderland this time has a role to play on the chessboard. Clearly Lewis Carroll is teaching young Alice how to play the game of chess so that she can remember who the pieces are. The underlying conversation between the characters though is once again very telling when it comes to how children are treated and trained to behave in Victorian society. Alice does become queen in two very different ways. On  the one hand, she, as a simple pawn, crosses the chessboard to become a queen. But, on the other hand, she has learned much from her adventures and thus is equipped to make decisions as an adult and a leader should.