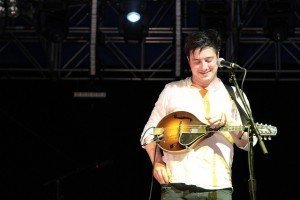 On April 27th, fans crowded into New Orleans, Louisiana’s Woldenberg Park for a different kind of performance. After touring five cities in the U.S. in vintage railroad cars, Mumford & Sons, Edward Sharpe & the Magnetic Zeros, and Old Crow Medicine Show made their final stop in New Orleans for their last show of the Railroad Revival Tour. The openers, Old Crow Medicine Show, are folk vets that started making music together in 1998. Their slot on this tour shows exactly how big Mumford and Edward Sharpe have grown in rock hierarchy since their relatively recent beginning, because these well-seasoned musicians played before them.

Edward Sharpe & the Magnetic Zeros — known for their song “Home” — took the stage after for a short and sweet set where the animated frontman, Alex Ebert, spent most of his time singing on the barricade with the crowd (and clotheslining me with his mic cord). Folk darlings, Mumford & Sons took the stage shortly after. Since their humble beginning in late 2007, they have been thrown into world renown fame for their simple and honest music that translates into a powerful stage presence and performances. This show was no different and had fans smiling and dancing all night.

For the encore, the entire crew of the Railroad Revival Tour crowded on-stage and sang a rendition of “This Train is Bound for Glory.”  The show, overall, was intimate — which should be expected at a Mumford & Sons set.  The level of comradery at their shows is astounding, as fans never leave the venue without feeling like they have made new friends. In case you missed out on this tour, you can catch up on their past events through their Tour Blog or purchase a ticket to one of Mumford’s summer U.S. dates.