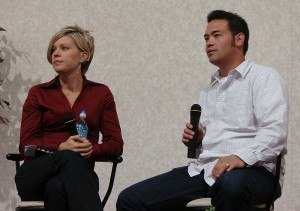 The mom of eight opens up to Dr. Drew about her love life post-divorce

Kate Gosselin, mother of eight, opened up to Dr. Drew on his show “Lifechangers” on Wednesday about her love life since her divorce from Jon Gosselin in 2009.

Kate Gosselin, whose short “mom” haircut used to be the butt of jokes, appeared on Dr. Drew’s show looking hotter than ever with blond hair past her shoulders, and wearing a gray and silver-sequined long-sleeved dress that showed off her toned legs.

Kate Gosselin wasn’t in such amazing shape after giving birth to sextuplets, but after a tummy tuck and breast augmentation, she began to gain a little more confidence with her body.

After a stint on “Dancing With the Stars,” a show known for the intense rehearsals contestants endure, it was impossible to tell Kate Gosselin had given birth to eight children, let alone that she had carried six at the same time.

During her conversation with Dr. Drew on Wednesday, Kate Gosselin, 36 and single, said, “The odds are so against me, one mom and eight kids. I am lonely. I clean up the house, put kids to bed and there I sit. Ideally I would find that person… don’t know if I feel ready for that.”

Kate Gosselin and her family stared on the TLC reality show “Jon and Kate Plus 8”, which became “Kate Plus 8” after the couple divorced. Since the cancellation of her show, she has a new job as a coupon blogger for CouponCabin.com.

It’s no wonder the working mother of eight can’t find time for a real love life.

Kate Gosselin told Dr. Drew that she has no romance in her life.
“I’m too busy. I think a lot of my friends who are being constructive say, ‘Gosh, who are you going to meet that is going to be able to deal with eight kids?’ My answer is always if they can deal with eight kids in our situation, it probably will be the person. It will sort of prove it,” Kate said.

Kate Gosselin said she would love to have somebody in her life, but is her kitchen ready for another mouth to feed?

She recently tweeted, “Well, I finally did it! I broke out BOTH Crock pots to cook ONE dinner for this family of 9! Wow! Massive cooking increasing all the time! Good morning, by the way!”

It’s likely the amount of food her family goes through won’t decrease as her two oldest children near their teenage years.

As for her relationship with her ex-husband Jon, Kate Gosselin told Dr. Drew that their relationship has become less strained since the divorce.

“He basically lives his life and I live mine. It’s more peaceful. Probably not anything that I’m doing differently. Possibly he’s working now and so he feels like he’s living a regular life again and maybe a little happier with himself, so that boils down to peace between us. The kids are now okay going there,” Kate said, “ The bottom line is the kids come home basically happy and that’s all that matters.”

For now, Kate Gosselin will continue to make dinner for her eight children and blog about coupons, but she hasn’t closed the door on finding love.