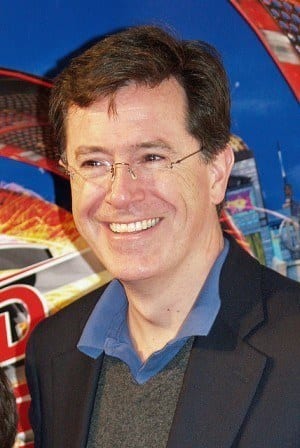 On his importance: “the hub around which the republic turns.”

Stephen Colbert returned yesterday from his hiatus, “Hi, How ya been?” He addressed his audience.

The absent host empathized with viewers on how it feels to be deprived of Stephen Colbert, “I can understand why the machinery of this great nation ground to a halt last week when you were denied this. I’m sure you felt the same as I do when I’m in a room with no mirrors.”

Since the absence of Stephen Colbert from the “Colbert Report,” wild rumors have surfaced as to why the comedic talk show host missed the last week of production.

“Some people said my show was canceled by the Federal Communications Commission at the request of the Federal Election Commission because I was about to announce my presidential candidacy,” said Colbert, “Others said I was canceled because I offended the Catholic church when I compared the pope’s hat to a giant yet stylish prophylactic. Still others said I was in rehab, always an attractive option if they have that for Diet Coke.”
Colbert even went on to say that Joan Rivers accused him of taking time off to get plastic surgery.

Colbert actually had to take care of his ailing mother. In true fashion though, he never actually admits the reason for his absence but lightly alludes to his family emergency and the condition of his mother jokingly, “Evidently having 11 children makes you strong as nails. Confidential to a lovely lady.”

Colbert’s mother, 91-years-old, has apparently recovered from her illness. Watch the video of last night’s “Colbert Report” below: