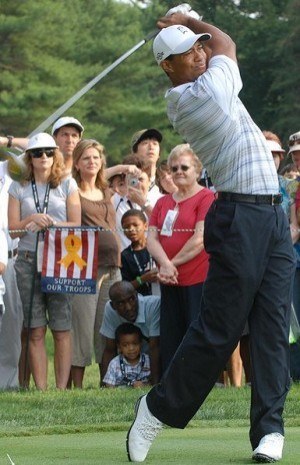 Tiger Woods’ former caddie Steve Williams apologized on Tuesday for a racial slur he made against Woods recently.

AP reports that Woods and Williams met on Tuesday. “We talked this morning, we met face to face and talked about it, talked it through. It was a wrong thing to say, something that we both acknowledge,” Woods said. ”He did apologize. It was hurtful, certainly, but life goes forward.”

Williams allegedly told a crowd at a caddies’ awards party in Shanghai that he wanted to shove Adam Scott’s victory “up (Woods’) black a**hole.”

”Stevie’s certainly not a racist,” Woods said Tuesday. ”There’s no doubt about that. It was a comment that shouldn’t have been made and was certainly one that he wished he didn’t make.”

Williams was fired by Woods in July after more than a decade together.