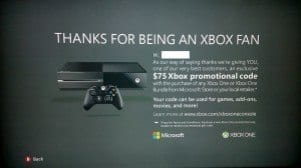 Xbox 360 owners looking for a reason to upgrade to current-gen may have one. Microsoft is offering current 360 owners an upgrade to the One with a $75 voucher with the purchase of an Xbox One or Xbox One Bundle.

Spotted by a NeoGAF user after powering up their 360, the voucher is valid between July 7th and July 31st. Microsoft may be sending this voucher to select users only, though the criteria for selection is currently unknown.

After Microsoft’s impressive show at E3 earlier this year (90 straight minutes of games), this offering comes as a bold move to get 360 users on the current-gen for the third and fourth quarter. With the upcoming Halo Master Chief Collection on the horizon, Xbox users are having a hard time finding reasons not to upgrade.