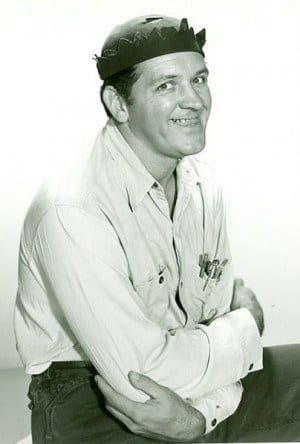 George Lindsey, most known for his portrayal of dimwitted Goober on the Andy Griffith Show, died early Sunday morning. He was 83.

Alabama native George Lindsey played the part of the genial auto mechanic Goober Pyle on the Andy Griffith Show, and its spinoff Mayberry R.F.D, and was later a regular on the long-running country music comedy show Hee Haw. He died at a healthcare center in Nashville after a brief illness, said his manager and booking agent, Carrie Moore-Reed.

Andy Griffith was grateful that he had his last conversation with George Lindsey just a few days before his death. “I am happy to say that as we found ourselves in our 80s, we were not afraid to say, ‘I love you.’ That was the last thing George and I had to say to each other. ‘I love you.’”

“George Lindsey was my friend,” Griffith said in a statement. “I had great respect for his talent and his human spirit.”

The Andy Griffith Show was in its fourth season in 1964 when George Lindsey first appeared as the cousin of naïve gas station attendant Gomer Pyle, played by Jim Nabors.

“America has grown up with me,” George Lindsey said in a 1985 interview with Associated Press. “Goober is every man; everyone finds something to like about Goober.”

George Lindsey was born in Alabama in 1928. He majored in biological science and physical education at what is now the University of North Alabama, graduating with a bachelor of science degree. After three years in the Air Force, he worked one year as a high school baseball and basketball coach and history teacher at Hazel Green High School in Alabama.

In 1956 he moved to New York City where he studied acting on the GI Bill at the American Theatre Wing and began his acting career on Broadway, appearing in the musicals All American and Wonderful Town.

One of his first TV jobs was one of the liars on To Tell the Truth. His other TV credits include roles on Gunsmoke, MASH, The Wonderful World of Disney, CHIPS, The Glen Campbell Goodtime Hour, The Real McCoys, Riflemen, The Alfred Hitchcock Hour, Twilight Zone and Love American Style. Later, he provided voices in Disney animated features including The Aristocats, The Rescuers and Robin Hood.

In an interview in 1985 George Lindsey said of his career, “There’s a residual effect of knowing I’ve made America laugh. I’m not the only one, but I’ve contributed something.”