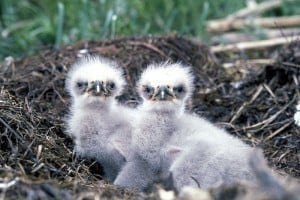 Eagle Cam fans have had quite a show this week.

In 2011, thousands tuned in to the Eagle Cam to see the eaglets in Decorah, Iowa hatch. The Decorah eagles returned to nest at the end of December. Since then, the Eagle Cam has had more than 11 million views.

The first egg was laid on Feb. 17 and was expected to hatch on March 23 or 24 with the other two likely to hatch in the following two weeks. Each eaglet will take between 12 to 48 hours to hatch, so Eagle Cam enthusiasts will have plenty of time to catch the miracle that is the birth of a National emblem.

The Decorah Eagle Cam isn’t the only nest surveillance on the Web. Further east, The Richmond Eagle Cam, in Richmond, Virginia, is keeping an eye on two chicks that just can’t seem to get along.

The larger chick in the Richmond nest opened a wound on the back of the smaller one Monday. Eagle expert Bryan Watts told the Richmond Times-Dispatch he has never seen a chick as aggressive as the bigger Richmond eaglet.

Watts said that he has seen wounds in chicks before and isn’t as concerned about the sibling rivalry as he is that the chicks won’t get enough food.

The Richmond Eagle Cam keeps surveillance on a nest settled on the James River, which has been flooding since Sunday. Eagles can have trouble fishing in muddy fast water, but the chicks appear to be healthy so far.

It seems that no eagle nest is safe from the Eagle Cam. Cities all over the nation have wired cameras near nesting sites in order to chronicle the birth of eagle chicks. Forget the awe factor; it’s the “aww” factor that’s keeping bird watchers and procrastinators alike tuning in to watch these little beaks break through their shells.