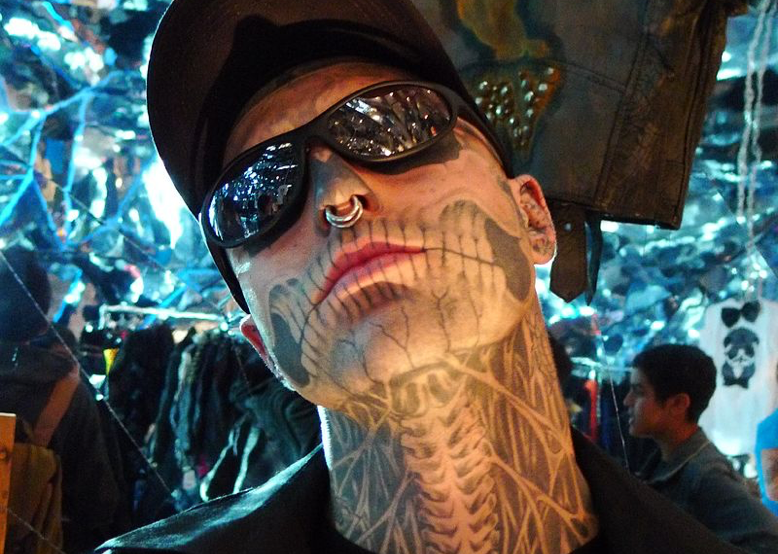 The model, popularly known as ‘Zombie Boy’, was found dead in his apartment in Montreal, six days before his 33rd birthday.

Genest, labelled “icon of the artistic scene and the fashion world” by his management, rose to fame in his modelling career for his completely tattooed body, including his skull face tattoo. He starred in Lady Gaga’s 2011 Born This Way music video, which now has over 230 million views on YouTube.

Nicola Formichetti, director of the video, gave Genest the opportunity to star alongside Lady Gaga, whose face was painted to replicate Genest’s skull face tattoo.

Formichetti also helped to initiate Genest’s modelling career. Genest has worked with worldwide brands such as Thierry Mugler and he was the first male spokesperson for L’Oreal.

He held two Guinness World Records for having the most insect tattoos and human bones tattoos, and he had also appeared in several movies, including ‘42 Ronin’ alongside Keanu Reeves.

Gaga tweeted her respects for Genest, saying, “The suicide of friend Rick Genest, Zombie Boy is beyond devastating. We have to work harder to change the culture, bring Mental Health to the forefront and erase the stigma that we can’t talk about it. If you are suffering, call a friend or family today. We must save each other.”

She then added in another tweet: “Science tells us that it takes 21 days to form a habit, if you are suffering from Mental Health issue I beckon for today to be your first day or a continuation of the work you’ve been doing. Reach out if you’re in pain, and if you know someone who is, reach out to them, too.”

Formichetti also tweeted about Genest, writing, “Absolutely heartbroken. Rest in Power, Zombie Boy. Sending all my condolences and love to Rico’s family and friends. If you ever need help, reach out. 1-800-273-8255 is the number for the National Suicide Prevention Lifeline. You’re not alone.”

Genest’s management, Dulcedo Management, took to Facebook to acknowledge his death, saying, “The whole dulcedo family is shocked and pained by this tragedy. Zombie boy, Rico, was loved by all those who had the chance to meet him and know him.”

When asked if the death was a suicide, Dulcedo responded: “at this point we cannot confirm nor deny, there are no witnesses and we must wait for the coroner. One thing is for sure, he was not a drug user, and he was sober at the time of the accident.”