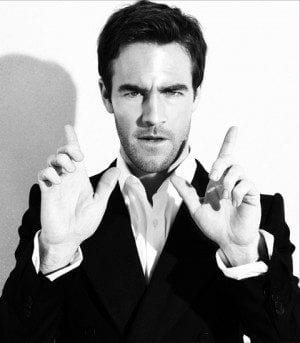 Actually, his wife had him. He just caught him.

James Van Der Beek is celebrating the birth of his new son.

The couple was married in August 2010, and welcomed their daughter Olivia a month later.

James Van Der Beek tweeted Tuesday, “Had my first son this morning… well, actually, my wife had him. I just caught him. Wow. Heart expanding way faster than my brain….”

He also tweeted, “If you oculd bottle up and distribute this feeling, I swear there’d be no more war. #fatherhood”

His wife tweeted on Tuesday as well.

“Had such a blessed and miraculous birth experience. Cannot wait to share it with all of you,” and, “Thank you for all the love and good wishes. I can feel it all.”

James Van Der Beek will return to television in the new ABC series Don’t Trust the B— in Apt. 23 in April.