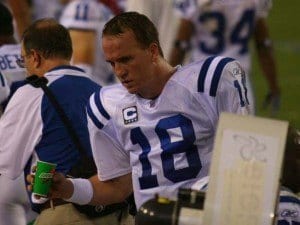 Where will he go?

Peyton Manning is a free agent, so where will he go now?

“I have no idea who wants me, what team wants me, how this process works. I don’t know if it’s like college recruiting where you go take visits. I mean, it’s all so new to me,” Peyton Manning said.

Peyton Manning spent all 14 of his NFL seasons in Indianapolis, but the four-time league MVP had a series of neck operations last year that kept him on the sidelines.

Peyton Manning has said that he definitely still wants to play football. As long as his health checks out, the list of teams who will be interested in signing a Super Bowl champion will certainly be a long one.

Seattle, Houston, Arizona and Kansas City have all been linked to Peyton Manning so far. Theories have been developed about where he will go, what he will do, and what he will try to avoid. For example, will he want to play in the same city, or the same division as his brother Eli Manning?

For now it is unclear who will sign Peyton Manning, but in a press conference Wednesday he said, “I’ll always be a Colt. I always will be. That’ll never change.”

The Colts decided to release the quarterback rather than pay a $28 million bonus. The bonus was part of a $90 million, five-year contract Peyton Manning signed in July. Peyton Manning and Colts owner Jim Irsay both said the decision wasn’t really about money.

The Colts are expected to take on Stanford quarterback Andrew Luck in the draft in April, and Jim Irsay has been throwing around the word “rebuilding” quite a bit.

It appears that the fate of the Colts is as unclear as that of Peyton Manning for now.