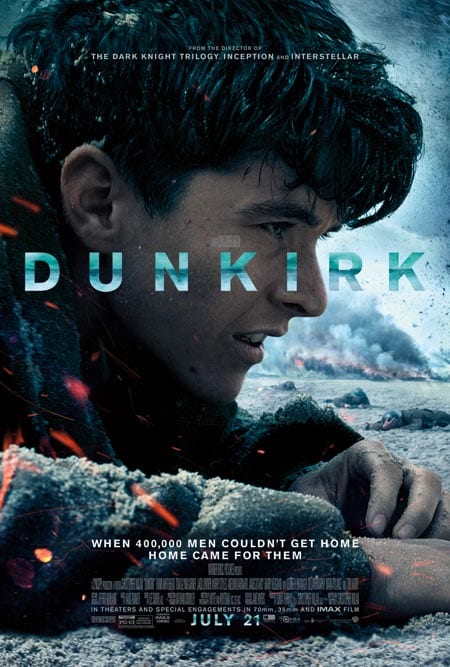 For the super fans that have adored Christopher Nolan’s work from the get-go, the first inklings of Dunkirk (July 2017) were received with open arms. Christopher Nolan’s Dunkirk is set to relate the true story of Operation Dynamo; a treacherous mission that demanded the rescue of 400,000 allied troops. These men were cornered by Nazi soldiers at the beaches and harbor of Dunkirk, France, with little hope of survival. The film is to be told from three perspectives of soldiers—from the land, sea and sky.

The Dark Knight trilogy (2005-2012), Inception (2010) and the more recent sci-fi thriller Interstellar (2014), solidified Christopher Nolan as a truly exceptional filmmaker—with each motion picture resulting in a blockbuster hit. His global success has gained him a place at the metaphorical elite director’s table, sat beside the likes of other greats such as Stephen Spielberg, Martin Scorsese and Alfred Hitchcock. Merely the mention of his name in association with a film title has become an indication of quality to both film devotees and casual cinema-goers alike.

Christopher Nolan is known widely amongst cinephiles as a man who never does things by halves; so fittingly, he has been given a tremendous budget to work with to create this larger-than-life blockbuster. As a screenwriter and director, he has proven time and again that his pictures can cause a frenzy at the box office and make big bucks—over $4.2 billion at the global box office to be precise. In light of this, it doesn’t come as a huge surprise that Warner Bros Studios has spared no expense in funding his newest and, undoubtedly, most ambitious project to date. Rumors have emerged that Nolan has spent $5 million to procure a vintage Nazi warplane (which he apparently proceeded to wreck for the film’s sake).

The first full trailer for Dunkirk aired back in December, making us all wriggle with excitement. Upon seeing the purposefully stark cinematography and the air of impending horror that laced the five-minute montage, it became clear that this is not a film to be missed.

While obvious comparisons can be drawn between his more recent films and Dunkirk, it feels as though an essence of his earlier work has seeped into this new WWII epic. Hans Zimmer, who skillfully conducted the music for several of his previous movies, will again grace us with his emotive compositions. Likewise, Christopher Nolan’s love for using IMAX cameras will feature once again in this movie. The Dark Knight was the first feature film to use IMAX cameras to shoot selected scenes, and Nolan has employed them ever since. The company’s 15perf 65m film cameras are being hailed as some of the best in the world in terms of clarity and high resolution, giving his audiences a more visceral experience.

Analyzing the full-length trailer of Christopher Nolan’s Dunkirk in more detail, there appears to be a focus on character perspectives. From frightened soldiers cowering for cover to avoid overhead Nazi airplane fire, to young boys solemnly queuing to join the boats astride their floating dead comrades. Each shot decisively places the audience in a position where they can share the viewpoint of the characters. This is a classic signature of Christopher Nolan’s storytelling. In some of his earlier films like Memento (2000) and The Prestige (2006), he uses the art of subjectivity to manipulate the audience and distort the storyline. In relation to Christopher Nolan’s Dunkirk, he has made it clear that he uses point-of-view shots to highlight a characters will to survive. We are provided with their current situation rather than a back story. In an interview with thestar.com Christopher Nolan stated: “It’s the most human movie I’ve ever made because it’s about the desire for survival. We wanted to tackle that and make what I refer to as a very present tense narrative where you’re in the moment with the characters.”

When questioned by French Magazine Premiere, Christopher Nolan also remarked: “I did not want to go through the dialogue to tell the story of my characters. The problem is not who they are, who they pretend to be or where they come from. The only question I was interested in was: Will they get out of it?” Christopher Nolan has insisted on several occasions that the film is “not a war film […] it’s a survival story”.

The sheer scale of the film is enhanced with tactical shooting to make viewers feel minor, as if we are only a tiny dot against the immeasurable chaos of war. In the trailer we briefly follow behind the silhouette of a young fighter as he looks out onto the beach and we share his astonishment as we scan over the sea of men gathered there.

Aside from aesthetics, speculations are mounting on the subject of how this particular film will be received. Christopher Nolan’s key demographic in the past has ranged from teens to middle-aged adults, and has sometimes seen less enthusiasm with older crowds. Perhaps the 1940s historical action film genre will draw in a more mixed crowd on this occasion. Another point to consider: although the events of Dunkirk are an integral part of British history, many are wondering if it will strike the same emotional chord with young American audiences.

Another controversial choice was that of casting—more specifically, the casting of One Direction superstar Harry Styles. Styles is joined by a gaggle of prestigious cast members such as Tom Hardy, Kenneth Branagh and Cillian Murphy. While Styles isn’t one of the lead characters, his appearance in the film credits has really divided critics. From Styles’ perspective, debuting your acting career with a Christopher Nolan film really isn’t a bad day’s work. But some are worried that the heartthrob may detract from the film’s potent messages. Others have foretold that he may show a surprising knack for the whole acting malarkey, and that this could mark the beginning of a successful film career for him. There is a distinctive moment within the trailer that shows Styles struggling to keep his head above the water in a dramatic struggle against the tide. Could this mean the possible demise of his character? Would teenage girls across the globe be able to bear the heartache? Only time will tell.

Whether you are a Christopher Nolan fan or not, it’s undeniable that the large budget, thoughtful cinematography and epic battle scenes will make Christopher Nolan’s Dunkirk a key contender come awards season. Now all that’s left is to wait with anticipation for the film to show in cinemas. Stay tuned for our detailed movie review upon release—watch this space!

Are you excited for the release of Christopher Nolan’s Dunkirk? We’d like to read your comments on the subject.