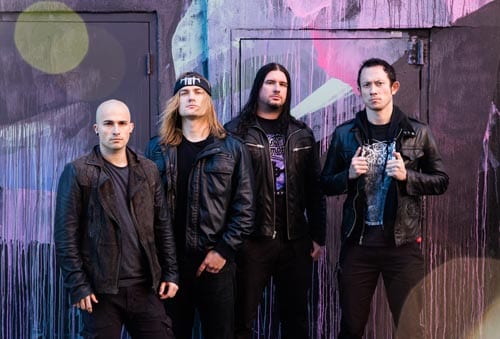 Trivium are set to release a reissue of their debut, Ember to Inferno: Ab Initio on Dec. 7. The album itself would not only pavd a new sound in the metal scene, it would also set a precedence for the musical direction the band would take in the future. Teasing diehard fans across the globe, they’ve released a rare demo of the track “The Storm” to whet their appetites. College News talks to vocalist, Matt Heafy, about the track and the story behind this rerelease.

College News: Hi Matt! Trivium has just released instant-grat track “The Storm” from Ember to Inferno: Ab Initio; a very rare, early demo—why this track?
Matt Heafy: Ab Initio is Latin for “”From The Beginning””. This compilation release is meant to bring listeners back to the very beginnings of Trivium up until the moments before Ascendancy was released. The first piece we released was “”Pillars of Serpents””, one that diehard old-school fans certainly will be familiar with. But with “”The Storm””, it was only available on the Blue Album—our local, unsigned album that is very rare—one that we recorded in 2002/2003. I felt this track would be quite an eye-opener to people unfamiliar with our early years.

CN: Where did the inspiration for “The Storm” come from? I get a sense of Shogun here!
MH: You nailed it on the head! Since I’ve been revisiting each of the releases included on Ab Initio, I can absolutely see how “”The Storm”” is the blueprint and foreshadowing for what Trivium would be doing in the future with an album or a song like “”Shogun””. I am very happy to see the early days were such an appropriate indicator for what Trivium would be forever.

CN: What’s the thought process behind the decision to reissue Ember to Inferno: Ab Initio?
MH: Ember to Inferno, when initially released, was almost unavailable anywhere due to not having proper distribution worldwide. When Lifeforce fixed its distribution, the album was then locatable, but soon the deal expired and I inherited the rights to the album back. I knew that I wanted to wait till just the right time to have Ember back out, but with unreleased material surrounding it that would show people the evolution of Trivium’s early years.

CN: Never heard-before tracks will be issued alongside Ember to Inferno—what can you tell us about these?
MH: The Red Album is a three song album we tracked when I was about 15 years old, back in 2001. Even with these three classic, unheard-before songs, you can see the initial blueprint for what Trivium would be doing for the rest of its career. The Blue Album is a pretty damn good sounding “”demo”” that we did to sell locally at shows we would play while still unsigned. The four tracks on Blue that reappear on Ember I actually feel sound better on Blue than even Ember. The Yellow Album is the three-song demo that got Trivium signed to Roadrunner after Roadrunner expressed initial interest through hearing Ember to Inferno.

CN: Ember to Inferno really put Trivium on the map as far as metal is concerned, and really inspired a new genre that would set a precedent in the alternative scene. Tell us about the creative process behind this album?
MH: The secret to Ember’s writing was that we just made exactly what we wanted to hear. We didn’t think within the confines of appeasing or displeasing anyone; we had no fans so we just made the music we wanted to listen to. I allow myself to be inspired by everything—and Ember is obviously influenced by so much more than just one genre or a small handful of bands.

CN: Would you ever play the whole album through in a future tour? Are you writing any new material at the moment and what can we expect from Trivium in the future?
MH: I doubt we would play JUST Ember from start to finish, but we absolutely always have several Ember songs ready to go for a tour. Whether playing one or two in a set list, we have quite a bit of the tracks ready to go at all times. Right now, the only plan for Trivium is the upcoming European tour at the beginning of next year.