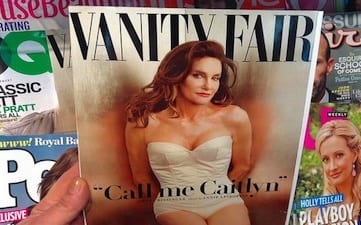 Caitlyn Jenner introduces herself to the world in Vanity Fair

The Vanity Fair cover of Caitlyn Jenner (formally known as Bruce Jenner) was released today, along with a preview of the profile written by Buzz Bissinger. The print issue doesn’t hit newsstands until June 9, but early access is available through Vanity Fair’s digital edition.

Bissinger spent hundreds of hours with Bruce leading up to the transition, and many hours with Caitlyn, including the cover shoot with Annie Leibovitz.

“This shoot was about my life and who I am as a person,” said Caitlyn. Jenner publicly came out as transgender in April, and this cover is the first publicity she’s done since completing transition.

The already-iconic cover and interview has been trending on social media with the hashtag #callmecaitlyn. Celebrities like Ellen DeGeneres, Lena Dunham, Maria Shriver, Jesse Tyler Ferguson, and Sam Smith have publicly tweeted their support for Jenner, along with thousands of others.

It’s true. Some generally progressive people have been less accepting of transgender individuals than other minorities, and while it’s naive to say they only feel that way because they haven’t been exposed to it, it may very well be the case for some people. Gender identity is a complicated concept to discuss, but that doesn’t mean we should ignore it. The Human Rights Campaign has a succinct and clarifying write-up of what the different terms mean.

Jezebel has collected some of the best quotes from the interview. The one that stands out the most to me (and I think illuminates the reasoning behind the decision) is this one:

“’I don’t want to be this way’ was the bottom line. Who would want to be dealing with all these issues?…I look at men and say, Oh my God, would it not be so wonderful to be comfortable in your own skin, male or female, so when you wake up in the morning you get dressed and go to work and this identity issue is not even present?”

What we should do is celebrate people’s right to be themselves. That’s all. It’s not hard to let a person express their gender identity however they see fit. We should look at Caitlyn Jenner as someone helping the cause of transgender equality, and opening the discussion on other issues like transgender health care rights.

The Human Rights Campaign is a great place for resources and educational material. Gender Spectrum and the CDC’s page on LGBTQ resources are also great for learning more.