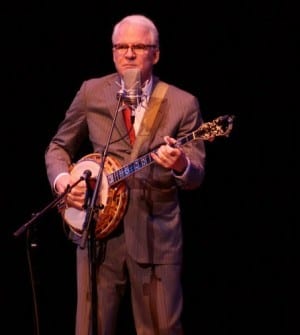 Steve Martin has successfully parented either a boy, or a girl

Steve Martin has apparently decided that he has finally gotten enough practice as a Dad in movies and has made the big leap—at 67 he is a world-renown actor, comedian and first-time Dad.  Everyone is both surprised and incredibly pleased for the actor and his 41-year-old wife and “It’s Complicated” co-star Anne Stringfield.  In fact, Steve Martin hasn’t even released an official announcement that he has a baby—journalists simply saw Steve Martin and Stringfield near their home in Los Angeles; both the baby’s gender or name is unknown, although Steve Martin’s rep confirmed the news to USA Today.

Steve Martin seems like he is one of those people that is as quirky off screen as he is on.  This is not the first time the “Dirty Rotten Scoundrels” star has kept a huge life event from the public eye.  In 2007, Steve Martin and Stringfield’s wedding was a surprise even to the guests, including Diane Keaton and Tom Hanks.  Steve Martin told everyone that the soiree was simply a dinner party!

The baby is definitely in for a wild ride.  Steve Martin has led a long life, and is known as a novelist, comedian, actor, playwright, producer and musician, but never yet as a “Dada.”  His reticence from media attention and overbearing public announcements is a welcome hint at the wholesome, relatively private life the Martin’s baby will enjoy.  Well anyway, good for them!