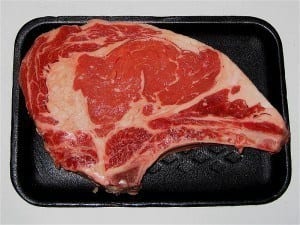 Supplement it with a nice piece of fish, or how bout a nut

New studies now indicate that eating unprocessed red meat- hamburger, pork lamb and roast beef increase a person’s chance of premature death and raise the risks of death due to cancer and heart disease.
Researchers at the Harvard School of Public Health determined studies from over 110,000 people, who ate as little as two pieces of bacon or one hot dog, per day, increased their mortality rate by 20 percent over a 20 year period.
Lead researcher on the study, An Pan, told LA Times that before the study, his researchers assumed only processed meat will cause health concerns and was surprised when “any red meat you eat contributes to the risk.”
The study also suggests that replacing red meat in one’s diet with fish or poultry for instance will in fact lower the risk for premature death. When replacing red meat with nuts, studies showed a lowered risk of mortality by 19 percent.
“This study provides clear evidence that regular consumption of red meat, especially processed meat, contributes substantially to premature death,” said senior researcher Frank Hu, “On the other hand, choosing more healthful sources of protein in place of red meat can confer significant health benefits by reducing chronic disease morbidity and mortality.”
Pan suggest to those who just can’t kick the red meat habit, “The message we want to communicate is it would be great if you could reduce your intake of red meat consumption to half a serving a day or two to three servings a week and severely limit processed red meat intake.”