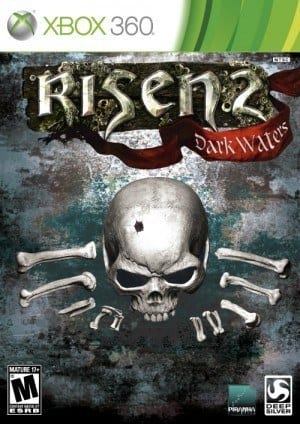 Fun, but not good

A welcomed step away from your typical fantasy or sci-fi role-playing game, Risen 2: Dark Waters puts players on the open sea. Embracing a stereotypical, foul-mouthed, treasure hunting scalawag, players take the role of an Inquisitor-turned-pirate in an attempt to halt the evil sea witch Mara and her pet Kraken from taking rule of the oceans. As frustrating as it is interesting, Risen 2: Dark Waters will leave players with confused looks on their faces as they see poor visuals and unresponsive controls, but also a wonderfully deep story and knee-slapping comedy.

It’s not that the visuals are poor, it’s just that they’re not good. Most of your time is spent on tropical islands, trekking through jungles, and traversing caves, but each area is disappointingly similar to the last. Even in cities and villages that are on separate islands give a sense that they used the same architect for each project. That, or they’re using pre-fabricated villages from the local ‘Save-M-arrrrrrt’. Also, despite being on Xbox 360 (also available for PC, and it looks far better) there are noticeable frame rate issues. Typically when battling grave spiders, a particularly nasty opponent, you’ll see stutters Xbox players are simply not accustomed to. Finally, though noticeable in some online or PC games, lag occurs throughout the game (single player only) when trying to pick up items. The hero may pick up four or five different pieces of gold or herbs, only to have a pause of 10 or 15 seconds before a screen indicator lets you know that it has been retrieved.

Despite the issues with the visuals, the character dialogue does enough to pull the player on, penduluming back and forth between semi-immersive and humorous. Be warned that this game is explicit; you’re dealing with pirates after all. There are more utterances of ‘the F word’ than a Tarantino flick and beyond that there are insults hurled that cause jaw-dropping gasps. Voice acting is, again, average and with a better group used could have pulled players in further. Instead you’ll get the sense that the game doesn’t take itself seriously enough; which is wonderful if that’s the case, but at key moments it’s clear the the intent is to cause some emotional attachment to characters or situations. Each time that occurs, the personal attachment is lost.

The story isn’t bad, though. Even with voice acting that is more comical than dramatic, the story pulls the hero from island to island in an attempt to collect various weapons of power, each with its own role in defeating Mara and the Kraken. Along the way the hero goes from Crewman to Captain and starts recruiting his own team, each with their own individual roles. The benefit to adding to your crew is that most often you’ll be selecting someone to accompany you on your journey. Of course, the person you select should compliment your own play style.

Your character has multiple ‘build options’ as you progress through the story, allowing you to specialize in blades, guns, cunning (thievery), or voodoo. As you kill enemies or discover new locations you build ‘fame’ which is then converted into building your skills and unlocking new talents.

The blades skill focuses on sword weapons and allows the hero to block, parry, and riposte enemies who enter the melee. It also allows power moves to be unlocked which can do massive amounts of damage. Unfortunately, the melee battles suffer from stiff, gangly controls. Too often you’ll find an enemy who attacks you repeatedly, interrupting your attack and leaving you at the mercy of yet another attack. As you get into this cycle, the only way to remedy it is to remove yourself from combat completely, then start anew, causing frustration and refusing to let players actually get immersed in the combat system.  Guns on the other hand, work well and despite being a touch overpowered, give players the perfect pirate feeling. Muskets, shotguns, rifles, and pistols all do massive damage if they hit their target, but also require a moderate reload time. That is, until you’ve spent enough fame to enhance your skills.

Cunning primarily adds support skills like lock-picking, sneaking, and silver-tongue, which is the ability to convince those you talk with to agree with you. Considering the massive amount of treasures to loot and NPC’s to chat with, players should expect to put time into leveling this up as quickly as possible.

Finally, voodoo is available very early in the game, but at the expense of your firearms. If you choose voodoo, essentially siding with the natives, you’re forced to forego your training with the Inquisitors, responsible for firearms training. Likewise if you choose Inquisitors, the voodoo trained natives will shun you from their training. Voodoo allows for a very interesting angle, using dark magic to manipulate your enemies. This creates a unique opportunity to finish missions in alternate ways and gives incentive for additional plays of the story.

Truly, Risen 2: Dark Waters can easily be described as, ‘not good, but fun’. It has numerous design flaws, poor visuals on the Xbox, and lacks the sharp voice acting that helps bring games to another level. In spite of all of the problems, players will still find themselves enjoying most of the 40 or 50 hours of gameplay. Lock-picking, something typically mundane in RPG’s, allows players to be active and engaged. The story, despite coming to a crashing halt after the enormous voyage the hero embarks on, is easily followed and fun to play. Side missions are countless and range from simple treasure hunts to seeking legendary items and even include multiple social situations. Risen 2: Dark Waters won’t be listed in any Game of the Year discussions, but it’s a fun time for those looking to escape the typical sci-fi or fantasy RPG.