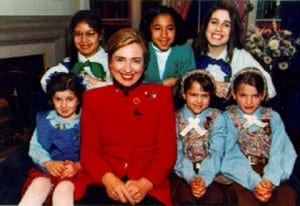 Girl Scouts are perhaps most well known for the selling of Thin Mints and Samoas, but some are claiming that the cookie-selling troops are not so innocent. The troops have been facing controversy as some conservatives have revoked their support of this “radical” organization

Indiana lawmaker Bob Morris has caused quite a stir recently, proclaiming that the Girl Scouts promote abortion and homosexuality. Some Christian Conservatives have pulled their children out of the troops and have even gone so far as to call the organization “evil.” Morris alleged that the Girl Scouts of America and the World Association of Girl Guides and Girl Scouts have conspired with Planned Parenthood in attempt to “sexualize young girls through the Girl Scouts,” according to NBC News.

That the Girl Scouts are affiliated with Planned Parenthood should not come as a surprise. In 2004 the CEO of Girl Scouts USA, Kathy Cloninger stated on national television that “We partner with many organizations. We have relationships with our church communities, with YWCA’s, and Planned Parenthood organizations across the country, to bring information-based sex education programs to girls.” Some conservative Christian groups feel that Planned Parenthood teaches promiscuity to children. The organization distributes educational material to youth that some consider to be pornographic.

Although the Girl Scouts partner with many organizations, their intention is not to promote anything but acceptance. The Girl Scouts official website states that the organization was founded “with the goal of bringing girls out of isolated home environments and into community service and the open air.” The organization boasts a “willingness to tackle important social issues… [and a] commitment to diversity and inclusiveness.”

In 2000, the Patriots’ Trail Girl Scout Council in Massachusetts held a volunteer workshop on sexual orientation, working in tandem with the Gay Lesbian Youth Support project to educate about overcoming barriers that may have existed in the organization in an attempt to instill a culture that is inviting to all girls. The Girl Scout council also developed a mentoring program for lesbian women and girls to help deal with sexual identity.

The Scouts and Planned Parenthood have both dismissed Morris’ statements as ridiculous. “Planned Parenthood currently has no formal partnership with the Girl Scouts, but supports their mission and recognizes their century of contributions to our society,” the organization said in a statement to NBC station WTHR of Indianapolis.