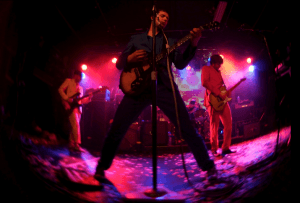 Alt-pop foursome, OK Go have carved a name for themselves in the music industry for with their eye-popping, innovative music video. The group first made a statement with their music video for their 2006 hit, “Here It Goes Again” where the four are seen rotating between four treadmills while busting out the dance moves.

This time, they’ve taken it to a whole new level with the official music video for their song, “I Won’t Let You Down” from their fourth studio album Hungry Ghost which released earlier this month.

The video features the foursome riding motorized scooter chairs from Honda who also funded the video. But wait— that isn’t all.

The video, primarily filmed by a camera on a drone also features dozens of choreographed dancers in perfect sync as they dance around in knee-high socks and pleated skirts spinning red and striped umbrellas.

Later in the video a group of Japanese schoolgirls are seen using colorful umbrellas to shape lyrics and faces of the band members.

The entire video pans over the city of Tokyo with a visit to Tokyo Robot Restaurant.

The foursome turned to Morihiro Harano to direct the innovative, eye-popping video that has certainly raised eyebrows due to its creativity and its human vs. machines theme. Japanese choreographer Airman was responsible for the eccentric choreography seen throughout the video which premiered first on NBC News’ Today show.

Check it out for yourself here.