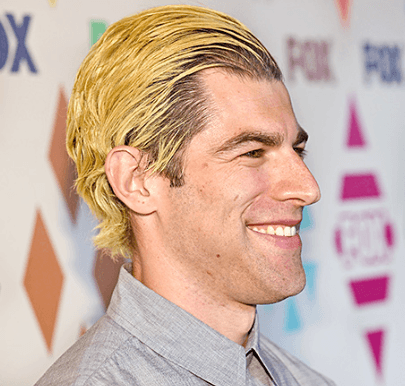 It’s going to be so weird seeing Max Greenfield as Schmidt in that fat suit on New Girl after watching him appear so skinny on American Horror Story: Hotel in October.

For weeks since Greenfield stepped out with blonde hair at the Shop For a Cure Benefit to support the Charlotte & Gwyneth Gray Foundation in July at Switch in Bel Air, California, people have been wondering if the change was for his role. Now we have answers. Lots of ‘em.

“He plays an addict who checks into the hotel and tangles with Sarah Paulson,” Murphy stated. “He cut off his beautiful hair and dyed it and then we had to let the roots grow in.”

Greenfield’s hair isn’t the only thing that has changed. “I think he’s lost 30 pounds,” Murphy explained, “which is odd because his wife is due to have a baby any day now, so she’s nine months pregnant and he’s living on celery water. So she’s not happy about that, and yesterday I talked to him and his waist is down to I think a 27. So he’s really committed to it, and he looks amazing.”

Murphy also sent some chills down our spines with a small teaser. He stated during the panel that Greenfield does “incredibly, probably the most disturbing scene [they’ve] ever done.”

American Horror Story: Hotel is definitely going to be something. Tune in to the the show on FX October 7.