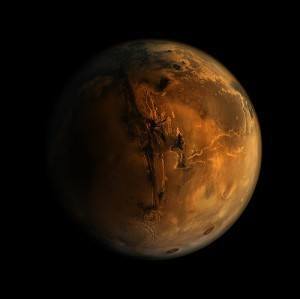 The Mars rover Curiosity has made another incredible discovery. The rover found a streambed where water once flowed near its landing site. A study of the ground near the Martian equator revealed a possible history of fast moving water over Mars’ surface with hip-deep areas of water flow.

NASA scientists came to the conclusion that the mars discovery revealed water flow on the now dry and dusty planet’s surface after analyzing stones and pebbles near the Gale Crater. Scientists saw that some of the stones were rounded and large, indicating long periods of time spent in fast moving water. William Dietrich, Curiosity co-investigator, said the pebbles indicated the movement and depth of the water.

“From the size of the gravel it carried, we can interpret the water was moving about 3 feet per second, with a depth somewhere between ankle and hip deep,” Dietrich said. So, not only was there a presence of water, but it had movement and was in fact transporting matter across the Red Planet’s surface. Dietrich went on to say, “This is the first time we’re actually seeing water-transported gravel on Mars. This is a transition from speculation about the size of the streambed material to direct observation of it.”

The time period of the water flow is not yet known, but Dietrich believes it to be “beyond the thousand-year timescale.”

The Mars rover Curiosity discovery, needless to say, is proving the Mars mission to be quite successful. Curiosity is about 50 days into its two-year mission in researching the Gale Crater.