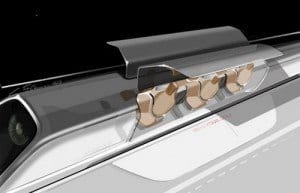 Hyperloop will be the fifth mode of transportation, according to South African-American entrepreneur and inventor, Elon Musk. Where Hyperloop was just an idea a year ago, it seems this “hyper speed” train is starting to be planned out, with an “Alpha” design being released two days ago on August 12.

Hyperloop is proposed to be an above-ground train system that will travel between San Francisco and LA in around 35 minutes. The train will roughly reach speeds of 800 miles an hour, which is slightly less than the speed of sound. This would make the Hyperloop nearly twice as fast as the world’s fastest train, which resides in Shanghai, China and is dubbed the Shanghai Maglev Train.

Musk believes that this brand new innovative transportation system is best for cities that are 1000 miles a part and have a hefty amount of traffic. He believes this new mode of transportation will eliminate the annoyances of normal air travel, including check-in times, take off times, and landings that generally take up a vast amount of time and energy.

In a PDF on Elon Musk’s SpaceX website that explains what the Hyperloop will be about, he mentions the problems with the current rail, air and road modes of transportation as being expensive, slow, or not environmentally sound. Musk says the Hyperloop will be not only inexpensive, but it will be extremely fast, environmentally friendly, and “ready when the passenger is ready to travel.”

Making the futuristic dream of the cartoon The Jetson’s come alive, the Hyperloop will enclose it’s passengers inside aluminum pods that will be inside of steel tubes. The pods will be made of Musk’s very own SpaceX material called inconel, which will withstand large amounts of pressure and heat.

“The interior of the capsule is specifically designed with passenger safety in mind. The seats conform well to the body to maintain comfort during the high speed accelerations during travel,” explains Musk. He adds “Beautiful landscape will be displayed in the cabin and each passenger will have access to their own personal entertainment system.”

The total cost of the Hyperloop passenger capsule is estimated to be no more than $245,000. Musk estimates the total cost of Hyperloop will be $6 billion for the passenger-only model and $10 billion for the model that will also be able to transport vehicles. This will be roughly four times less than the proposed high speed rail system that California is set to start constructing that will feature trains that go 200 mph and will cost a cool $70 billion.

Musk says he doesn’t plan to build the Hyperloop himself, but has released the design to private investors who he hopes to continue with the project.