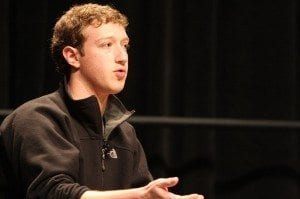 Only a week after the $38 share value and initial public offering (IPO) was released last month, the stock plummeted to $32 a share. Zuckerberg’s unloading of the stock upon the knowledge that he would experience his own substantial losses is what angered Facebook investors to cause them to urge having Zuckerberg sued.

The first lawsuit to Facebook last month was after only large investment companies off Wall Street, such as Goldman Sachs, JP Morgan and Morgan Stanley, had proper notice of the predicted drop. The small investors who were not in the know experienced a $2.5 billion drop in stocks after the IPO was released, a primary reason for having Zuckerberg sued.

Mary Schapiro, the head of the Securities and Exchange Commission, said, “There is a lot of reason to have confidence in our markets and the integrity of how they operate, but there are issues we need to look at specifically with regard to Facebook.”

According to Business Insider, Facebook investors are not the first to have Zuckerberg sued. In July 2010, Paul Ceglia had Zuckerberg sued because their deal to split Facebook ownership was discarded. This was in spite of the $2,000 Ceglia allegedly paid Zuckerberg for half of the ownership.

Zuckerberg was already searching for new ways to earn ad revenue when the number of Facebook Mobile users rose, and the number of ads on the home page dropped. The screen is smaller, so there is less room to show ads, and Zuckerberg did not want to create an obnoxious pop-up. Because ad revenue became low with the increased number of Facebook Mobile users, there was not enough money to support the $38 stock estimate. This lack of information is what caused people to want to have Zuckerberg sued.

Although he strived to make precautions tailored to the predicted drop, Zuckerberg still lost 25% of his profits.

According to The Washington Post, Wall Street aims to maintain good morale with institutional investors. One method to do so is to price a company lower than its worth, so when it experiences a sudden increase while trading, it “pops.”