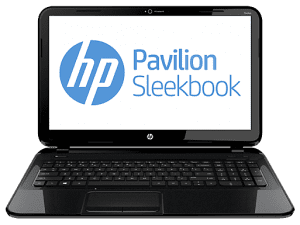 When shopping for a new laptop, price is one of the deciding factors if you’re on a budget. For college students, the word budget is important, but that doesn’t mean you have to suffer with low-end performance. That’s because HP has introduced the Sleekbook series of laptops and, with the Pavilion Sleekbook 15, gives students a piece of hardware that meets the requirements of day-to-day college life. While you won’t be playing Crysis 3 on high settings (if at all), the Pavilion Sleekbook 15 is light, safe, useful, and above all, affordable!

Boasting an AMD A8-4555M quad-core APU, which combines the CPU and GPU, the operating speed is modest at 1.6GHz. Combined with 4GB of RAM, power isn’t the primary selling point, instead users will find that this laptop excels at mobility and efficiency. The operating system included is Windows 8, a questionable choice considering the lack of a touch screen. Windows 8 does boot fast and operates efficiently, allowing for multi-tasking at a better rate of speed, but the design is overall a headache. Mainly due to the drastic change from the Windows we’ve been accustomed to since Windows 95, the difference is the Windows 8 tile-system that is fastly being pushed by Microsoft.

For entertainment though, the Sleekbook 15 excels nicely. Though no optical drive is included, therefore no DVD or Blu-ray option, the HD graphics make for streaming video, Netflix or HBO Go for example, a worthwhile enterprise. Other Sleekbook options have the option to include optical drives, but by removing it from the laptop itself the overall weight and size is cut drastically, increasing the mobility of it. An included webcam also records your actions in 720p, allowing Skype, Youtube or, if you’re willing to risk it, Chatroulette videos of sparkling clarity. Three USB ports and an HDMI port are also available if you want to connect your laptop to an external monitor and, to complement those ports, a card reader and network input for those without a Wi-Fi connection to connect to the included wireless card. A big perk to purchasing the HP Pavilion Sleekbook 15 is the included software. HP has packaged in tools to use for your music, video, chatting, movies, pictures and even some games.

It’s clear that HP recognizes and acknowledges what the sole purpose of the device is: basic, everyday use. They’ve included hardware that complements the system as well as your wallet and software to enhance your day-to-day needs. A built-in accelerometer will lock up the hard drive in the event of a drop, ensuring your data stays safe even when the rest of the laptop is not. The battery allows for up to four hours of continuous use, the keys on the keyboard are appropriately spaced for those of us with fat fingers and gives simple media controls. It’s true that you won’t be playing hardcore games or delving deep into video or photo editing, but at a price starting around $479.99 you’ll find that the laptop delivers in exactly the ways you’d expect. With a 15.6” monitor, overall weight just over 4.5 lbs, USB 3.0, HDMI out, and enough hardware to power the 64-bit Windows 8 OS, the HP Pavilion Sleekbook 15 is ideal for students looking for a simple, affordable option.