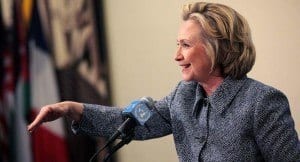 Former secretary of state Hillary Clinton addressed the concern of her using a personal email address instead of an official government email address during her tenure under Obama in a press conference this Tuesday.

Clinton declared that this was just due to ‘convenience.’

In the press conference Clinton admitted to deleting nearly half of the messages, (31,830 out of 62,320), in her personal email address before turning it over to the public. Clinton claimed that the messages she deleted were personal ones, such as Chelsea Clinton’s wedding plans, yoga routine, and other private matters.

In the conference Clinton had also insisted that no discussion of confidential materials were conducted over the personal email address. To do so would be a violation of secrecy laws.

Regardless of the attempt by Clinton to address this controversy, the conservative right refused to be satisfied by Clinton’s statement.

Republican National Committee President Reince Priebus stated, “Because only Hillary Clinton controls her personal email account and admitted she deleted many of her emails, no one but Hillary Clinton knows if she handed over every relevant email.”

This controversy comes as a potential obstacle to Hillary Clinton who would most likely to be running in the 2016 presidential election.