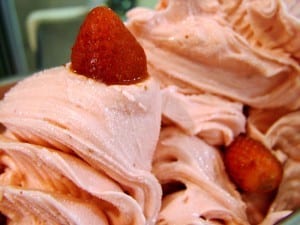 Tufts was only three last year when he was elected during the town’s Taste of Dorset Festival where the annual elections are held. Dorset’s ethically-murky election policies allow anyone to vote as many times as they would like at any of the multiple ballot boxes in stores around town.

Each vote also costs $1. Questions regarding the purpose of these funds went unanswered.

The tiny mayor runs a tiny town located about 150 miles northwest of Minneapolis with a population of between 22 to 28 souls, depending on whether the minister and his family are in town. Dorset also styles itself as the Restaurant Capital of the World.

Tufts walks around town people and people recognize him as their top local politician, calling him “Mr. Mayor” as he hands out his campaign card. One side of the card shows Tufts slicked hair, wearing a tan fishing vest over a suit jacket. The reverse has Tufts sitting on a porch swing with his girlfriend Sophie.

“I would love to be your Mayor as much as I love Sophie,” his campaign card.

When Tufts was first elected, he was only three, and according to reports he is running for re-election without having first entered kindergarten.

Despite the town’s questionable election practices, the voters are generally supportive of Tufts.

“I think he’s a cute little bugger and I think a lot of people share the same, you know, opinion as me, and it’s neat,” said Hubbard County Sheriff Cory Aukes of Tufts. “You know, how often do you see a little kid like that who’s—call ’em camera-friendly or whatever, you know—he’s got a very good little personality, and he’s not afraid to show it. So I think it’s great.”

Tufts main responsibility as mayor is to greet people as they come to Dorset. Resorts and tourism are the main industry. As the self-styled Restaurant Capital of the World, restaurants ranging from Mexican to Italian to family style line about two blocks of the town’s main thoroughfare.

Tufts’ most sweeping act of legislation thus far has been placing ice cream at the top of the food pyramid. According to Tufts, he has several favorite flavors.

Sources were also silent regarding the taxpayer dollars used to enact such legislation.