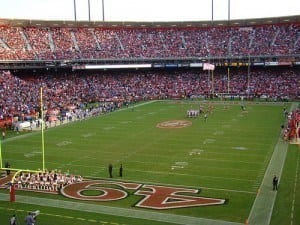 As football season kicks off, fans death and injuries are being reported

As football season has begun injuries are already in full swing. The injured are not the players but in fact the fans in the stadium. According to the Associated Press multiple injuries at various football stadiums were reported this kick-off weekend including one death. Intoxication is reported to be a contributor however safety regulations are at question as football season is one of America’s major sports pastimes.

Two injuries were reported at the Colts- Raiders game in Indianapolis early Sunday at the Lucas Oil Stadium. The fans reportedly fell after leaning on a railing. The railing snapped after many fans leaned over to reach for Colt’s player passing near the locker room entrance. Two fans received minimal injuries, one fan receiving medical attention at stadium and other admitted to local hospital for further evaluation. These two fans walked away virtually unharmed but an unfortunate 49ers’ fan was not as lucky.

Sunday an unidentified male fan fell to his death on Sunday at the 49ers’- Packers game in San Francisco’s Candlestick Park. According to bystanders, the man reportedly fell from a walkway after appearing heavily intoxicated. The distance of the man’s fall is unknown however the injuries sustained were deathly.

As investigations are still underway it is not clear what is at fault, the stadium’s faulty structures or over zealous fanaticism. Football games are notably full of raucous behavior generally influenced by the consumption of alcohol. Football’s main staple is tailgating where fans celebrate the game with grilling and drinking in the stadiums parking lot before entering the game. This suggests that high volumes of fans are entering the stadium already heavily intoxicated and potentially lowered inhibitions.

With all this excitement built, the stadiums must be equipped to house thousands of fans. The series of injuries this weekend suggest safety of stadium structures as well as the capacity that the structures can withhold especially with the amount of adrenaline-induced antics that fans may partake in. The injuries suggest tighter security surveillance or potentially stronger building structures that can house the romp of the football rebels.

49ers spokesman did express in condolences to the family in a statement Sunday, noting that the team was informed of the accident.

“We would like to express our deepest condolences to the family during this difficult time,” stated Bob Lange.

The 49ers’ Candlestick Park is set for demolition after this season and to be relocated in a brand new $1.2 million stadium in Santa Clara.