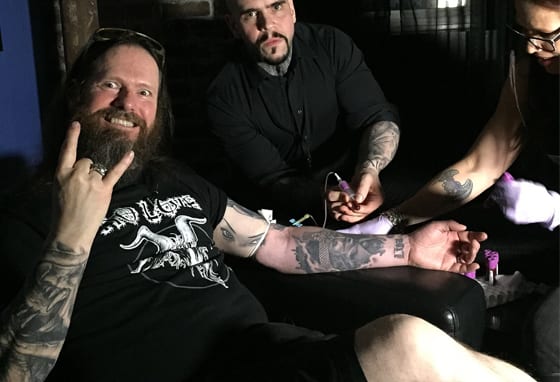 The Gary Holt signature ESP electric guitar wielded in blood, is the latest composition by American surrealist Vincent Castiglia. Castiglia is known for his monochromatic blood paintings that examine the contrast between life, death, and the human condition. While many surrealists allude a fantasy or dream realm, Vincent Castiglia’s compositions extract a sense of interconnectedness that transcends all human boundaries.

“It’s my concentrated, sanctified space in time. I approach these canvases like an altar. They are literal blood sacrifices that I take seriously.”

On his website, Castiglia presents his eye-catching, opaque blood paintings along with his featured works, such as the Gary Holt signature ESP electric guitar.

Recently, Vincent Castiglia spoke with College News about the new Gary Holt signature ESP electric guitar. Castiglia also shared his thoughts on the design and inspirational concepts that reveal an empowerment story with a spiritual context through the use of his bodily medium.

COLLEGE NEWS: I’ve admired your work for years and now the Gary Holt signature ESP guitar has brought me back to early 90s music when I was a kid listening to Slayer. This project seems to be a perfect fit for you.

VINCENT CASTIGLIA: Aw yea, 100% man, it’s another example of working in my career with some of my heroes. Giger was an example and that was a pivot point where I felt like the skies had opened up, to have been acknowledged by Giger in that way and similarly to work with Slayer and to work with Gary Holt and ESP. The first show I ever went to was a Slayer show. It was like 94 with Slayer, Machine Head and Biohazard at Roseland. So to be working professionally with them and doing such personal work for Gary Holt is just surreal you know?

CN:  Your genre of surrealism draws a contrast between life and death which you relate to your disposition. With that said, what was your situation like when you painted the Gary Holt ESP electric guitar?

VC: You can really look at the work and delineate, pretty clearly where I was at each particular point in time and something that I’ll point to in the work, which has changed over the years I think, is the amount of violence to the flesh. Before a certain point, these figures were ripped up and there was so much decay. It was very much the place where I was coming out of or trying to get away from.

So in recent years, I feel like the figures themselves have become more whole and stronger and this piece is really a representation of that. Obviously I am working with Gary Holt and his signature ESP electric guitar, so I wanted to have his input on it. He said that he wanted something sick! That was the operative word and that’s awesome. But something so personal for him, working in his blood and everything, I wanted to get some concrete direction. We came to the idea of a classical depiction of Lucifer not the contemporary, ugly you know disfigured looking scary monster but an actual biblical kind of classical representation; the most beautiful angel. He is depicted moving through some fire. There’s flames and a lot of movement.

CN: Speaking of movement and the texture or pulse to your work, the Gary Holt signature ESP guitar seems to come alive as the surface seems to pop right out at you. How do get the viewer involved in this movement?

VC: Well, It’s really a matter of composition. The canvas here was the shape of Gary’s ESP signature guitar; those were my parameters. It was a matter of the design occupying the space fully. What I mean by that is not going small, or I should say going large enough that what is most important about the design is communicated in the size of things. I do that on canvas as well. It’s like there is conscious thought put into some things and the rest of it kind of just happens, the nuances, but that’s very deliberate in the composition. So in this case its Lucifer and he was the most important thing about this composition so he needed to be the largest. In order to get that sense of movement, I’ve got this three quarter view and also the fire is waving. It’s moving from right to left indicating his movement.

CN: Why did you decide to use the Gary Holt signature ESP guitar as a canvas?

VC: Well, we had talked about the project and whether or not it would be possible and that was the motivating force. Gary Holt wanted the ESP signature guitar, I was completely into doing it, and it was a matter of whether it would be possible or not. I didn’t see why not, it was just a matter of getting that surface to work with me, and to work with the blood. I had never worked with a guitar before but logistically, I felt like it would be like any other surface and it wasn’t initially because what I was trying to paint on was primed for an acrylic or an oil. The blood was not initially working because it was basically just repelling it. I got about a quarter of the way through when I realized that it was not adhering. I had to treat it in certain way which took a great deal of prep work. Once I got it to stay I just went to the throat. I’d cite it as my most detailed work to date.

CN: I know you used 18 vials of Gary’s own blood to create the ESP signature electric guitar. How much blood have you ever used for one piece and is this the first time you have used someone else’s blood?

VC: It’s the second time working with the blood of the collector of the artwork. I used my blood primarily throughout my career. I did a portrait for comedian Margaret Cho in her blood and Gary is now the second. And since then, it’s becoming somewhat of a thing, people would like to be in the work. It’s incredible! I find it to be one of the most magical things, to take part of someone’s physicality and the essence of what makes them, them. Their actual DNA and to create a piece of artwork based on that is the most profound transformation of substance and form that I can think of in this life.

I usually get about 15 to 20 vials out of myself at a time continually. If Iam taking blood from a collector, I can get little more than that. As far as how much I couldn’t even say. A whole lot!

CN: How does it feel that the Gary Holt signature ESP electric guitar is touring and being played it in front of millions?

VC: It’s incredible and it’s even more incredible that its Gary’s blood. It so perfectly fits him and it fits Slayer. You can’t write a Slayer song without the word blood in it. He is in the forefront which is producing this sound using his vital fluids. It’s the completion of this conceptual circle. I couldn’t have done it without Gary, he is a metal god and it’s like working with the blood of the Gods.

CN: Are you planning on doing any more work with other artists or making anymore guitars like the Gary Holt signature ESP guitar in the future?

VC: There is a new project on the horizon which is so new I can’t even talk about it yet. It’s another singularly unique awesome and inspiring project like the Gary Holt signature ESP electric guitar. I can tell you that it involves using another musicians blood.

VC: To put it lightly, growing up was a nightmare. Making art was something that I did as early as I could hold a pencil or a crayon or whatever the fuck I had at the time. It was the most effective way to dissociate from my environment. It became something I couldn’t get away from. Its like I had to. If I had to be honest about it, making art was a distraction. I needed it. Then it became catharsis. After doing it for so many years it became a guiding force where there was consciousness and deliberate content being addressed in the work.

My mother was mentally ill and undiagnosed. She has sense passed but it was a very confusing time for me. There as a lot of abuse. She was a hoarder of rotting garbage, of trash and food. So I grew up floor to ceiling in garbage and with maggots in my mattress and on the walls. The place was a disaster. The actual circumstances were beyond description. The work was, not to sound trite, how I fucking survived, and it became so much more. It was about thoughtfully addressing my issues. That’s why my work is so personal to me.

CN: What kind of art were you making as a child?

VC: Well I liked to draw demons ripping people apart and eating them. In time, it wasn’t just raw emotion, it became deliberate. Some people need to go to church and that serves their purpose, that’s how they connect with whatever they deem the creative force. This is like my way of connecting with the universal life, through working on my paintings. It’s my concentrated, sanctified space in time. I approach these canvases like an altar. They are literal blood sacrifices that I take seriously. Life doesnt have to be so serious all the time but my work is.

CN: Vincent is there anything else that you want to say about the Gary Holt signature ESP electric guitar?

VC:  I have some new hand painted limited edition prints in the store and posters signed for as low as $60. I have hand painted editions which are hybrids between an original and museum quality print drenched in my blood. Essentially it’s a print that I’ve painted on and comes with a certificate of authenticity. They are available through my webstore.