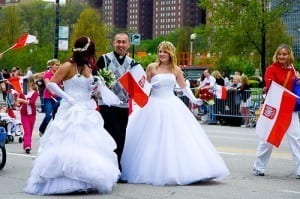 Casimir Pulaski Day is not just a Sufjan Stevens song, it’s a real holiday, that comes with some work closings, deliciously exquisite Eastern European treats, and a horde of hardcore Chicago Polish being excited about being Polish.  Not that they ever really need an excuse.  Casimir Pulaski was a Polish soldier, who, back in the day, exhibited incredible military strategy during the Revolutionary War, helping your average American free themselves of the oppressive British yoke.  As of recently, Casimir Pulaski is an honorary United States citizen, thanks to Barack Obama signing a resolution 230 years after his death.

Like all Eastern European holidays, Casimir Pulaski Day has boiled down to a feeding frenzy, complete with its own gastronomic culture that entire restaurants devote special Casimir Pulaski Day menus too.  Casimir Pulaski Day delicacies include mince-meat stuffed cabbage rolls, ruby-red beet borscht, cucumber salad, sauerkraut, and the holiest of Polish holy, tender, doughy perogi.  I pray that my post-mortem birthday anniversary goes down in history surrounded by extravagant dining practices as well.  In the meantime, Happy 266th Casimir Pulaski!

In honor of the desires of the second largest Polish population in the United States, Casimir Pulaski Day sponsors a generous amount of closings throughout the city.  All Chicago public libraries and Chicago and Cook County government offices are closed.  Presumably so that employees can braise their cabbage rolls with the care that only a free 24-hour day period can afford them.

Suffering from a food coma? Tune in to Sufjan Stevens’ demo track of “Casimir Pulaski Day” to aid the digestion.