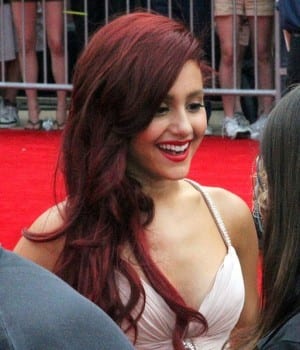 On Wednesday the 8th, Justin Bieber made a guest appearance on stage during an Ariana Grande concert, which took place at the “The Forum” in Inglewood, CA. The pop diva was there promoting her Honeymoon tour, in which for the song “As Long As You Love Me”, Bieber joined her.

As they sand back and forth during the song, Bieber got a little too hands on with Ariana, in which he put his arms around her waist. Grande seemed a bit taken back, and by all appearances seemed to be uncomfortable by the groping of Bieber. This may have been nothing more than stage antics, and perhaps not even that big of a deal, however, Grande is in a relationship with Big Sean, a Detroit rapper and Kanye West disciple.

Big Sean must have seen the slick Bieber move, and was not impressed. Big Sean went to the social media forum to call the Biebs out. His Twitter comment was very straight forward: “The kid is about to learn not to touch my girl like that.” he said, adding “Belieb that.” Although the Tweets have since been removed, they stayed up just long enough to circulate via his Twitter followers.

Reps for Big Sean were quick to fire back that the Tweet was a fake and that the rapper did not post that to his account. But another Tweet that was posted by Big Sean stated, “”so many times in my life I wish I could of been at 2 places at once.” And although people were quick to assume that this post was directed at Bieber, sources responded that it had nothing to do with Bieber, and that the post was just Sean missing his friends and family while touring.