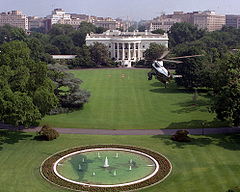 Secret Service officials said they have arrested a man in connection to a shooting at the White House on Friday evening.

The Secret Service said Wednesday that investigators have recovered two bullet rounds that struck the White House – one hit a window and the other hit the building’s exterior. The rounds may have been fired during a shooting that occurred on Friday night near the White House, but the two incidents have not been officially connected. Police are vigorously continuing their search for a suspect in the first incident.

No one was harmed by the shootings. President Barack Obama and his wife Michelle were in San Diego Friday night before heading to Hawaii where he hosted a weekend APEC summit of Asia-Pacific regional leaders, according to NBC Washington.

Ortega has a criminal record including arrests for domestic violence, drug offenses, assault on a police officer and underage alcohol possession, The Washington Post reported.

ABC News reported that the police believe the suspect is mentally ill. Sources told ABC that investigators have discovered evidence that suggests he has a fixation on the White House.