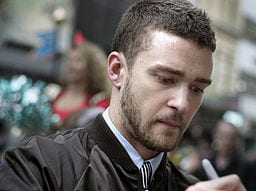 Material will be Timberlake’s first in 7 years

Justin Timberlake has finally returned to the arena that made him famous: music. It may be hard to remember since it’s been so long, but Justin Timberlake first found fame as a part of the boy band *NSYNC in the late 90s before transitioning to a solo career. His two albums, Justified in 2002 and FutureSex/LoveSounds in 2006 were both huge international hits that cemeted Justin Timerlake’s status as a force to be reckoned with. Since then, however, Justin Timberlake has primarily shifted his focus to acting. Well, the hiatus is over.

A cryptic countdown clock has surfaced on Justin Timberlake’s website, synced up perfectly with a teaser video Timberlake tweeted earlier on Thursday. In the video, Timberlake addresses his fans and puts any doubts to rest that he is through with music. “‘Somebody asked me the other day, ‘Are you just done with music?’ It means more to me than anybody else in the world,” Timberlake says, “Look. I’ve only done two albums in ten years. That’s the way I really look at it. What does the next decade mean for me? I’m the one who sits in — is obsessive about it before you even get to hear it.”

Rumor has it that a collaboration single with rapper Jay-Z will be revealed at the end of the countdown as a way to kick off Justin Timberlake’s return to the pop music throne. If Justin Timberlake had 99 problems, getting back into the music world isn’t one of them anymore.