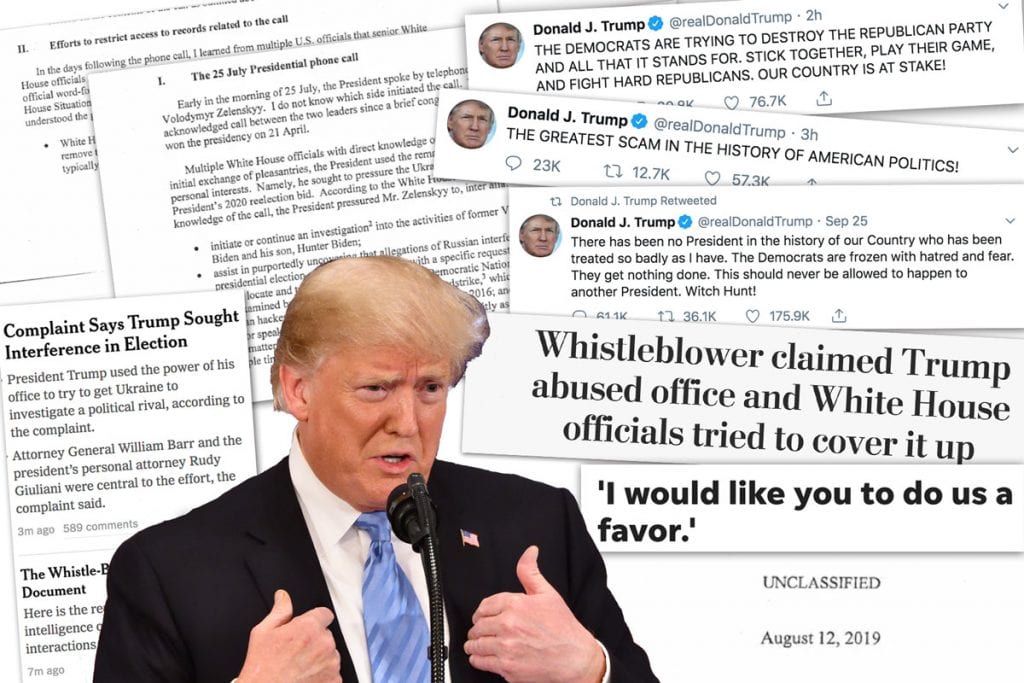 In the latest of what has been a series of astonishing developments surrounding the controversy concerning President Donald Trump’s phone call to the President to the Ukraine, the whistleblower complaint has now been released and it alleges White House interference in covering up the call.

In mid-September, the House Intelligence Committee Chairman subpoenaed the Acting National Intelligence Director to hand over a whistleblower report. It was filed last month and was determined to be of “urgent concern.” The document was not handed over, raising eyebrows all around.

On September 18, The Washington Post reported on the document, saying that it had something to do with an unspecified “promise” Trump had made to a foreign head of state. At this point, it was not clear what the promise was and to whom it was made. President Trump responded accordingly.

….Knowing all of this, is anybody dumb enough to believe that I would say something inappropriate with a foreign leader while on such a potentially “heavily populated” call. I would only do what is right anyway, and only do good for the USA!

Details began to slowly trickle out. The Wall Street Journal reported that the whistleblower complaint alleged that Trump had pressured the Ukrainian President Zelensky “about eight times” to work with his personal attorney Rude Giuliani to look into matters surrounding Vice President Joe Biden’s son, Hunter, who had sat on the board of a natural gas company in the Ukraine.

Compounding the situation was the matter of millions of dollars of aid that the U.S. had failed to release to the Ukraine, leading some to suggest this was a true mafia-style shakedown of one world leader by another.

Following the breaking news, Trump went on record to deny that he had ever tried to bribe another country to interfere in a national election while at the same time unintentionally confirmed some aspects of the story—such as a call had taken place to the President of the Ukraine and Biden’s son had been discussed.

By Tuesday, House Speaker Nancy Pelosi announced that impeachment inquiries would begin, describing the President’s actions as a “betrayal of his oath of office.” On Wednesday, a transcript of the call had been released. And on Thursday, the whistleblower complaint was de-classified and published.

The whistleblower complaint, which as you may recall from last year—we mean last week—had been withheld even in light of a subpoena. It had also been withheld from Congress. Its release now is the latest in a series of incriminating revelations for the Trump administration.

The complaint alleges that “senior White House officials had intervened to ‘lock down’ all records of the phone call, especially the official word-for-word transcript of the call that was produced as is customary by the White House Situation Room.”

“This set of actions underscored to me that White House officials understood the gravity of what had transpired int he call,” reads the complaint, continuing later to say: “…there was already a discussion ongoing with White House lawyers about how to treat the call because of the likelihood, in the officials’ retelling, that they had witnessed the President abuse his office for personal gain.”

Acting National Intelligence Director Jospeh Maguire, the same one who last week did not hand over the subpoenaed whistleblower report, called the complaint “unique and unprecedented” in an appearance before Congress on Thursday. He also said the whistleblower “acted in good faith.”

What happens next is truly anyone’s guess. To borrow from Maguire, the situation is “unprecedented.”

There are strikingly few cases of impeachment proceedings being launched in American history—just three, in fact: Andrew Johnson in 1868, Richard Nixon in 1973 and Bill Clinton in 1998. None of these events resulted in removal from office due to the impeachment. Nixon resigned before a vote could take place, and Johnson and Clinton were acquitted from all charges following a Senate trial and allowed to remain in office

The impeachment proceedings will be a long and drawn out event, likely contributing to further polarization in what was shaping up to be an extremely polarizing year anyway.

To begin with, a House committee, usually the Judiciary Committee or its subcommittee, will conduct an investigation to see if a federal official’s conduct warrants impeachment. According to the Constitution, impeachable offenses include, “Treason, Bribery, or other high Crimes and Misdemeanors.” How exactly to interpret that has been a source of vigorous debate throughout American history.

After the inquiries, the House Judiciary Committee will write up the articles of impeachment and then vote on whether to refer them to the House of Representatives. If approved, the articles will advance to the House floor where a simple majority of voting lawmakers if required to approve them.

Following a vote in the House, a trial in the Senate will take place where senators become jurors and the chief justice of the US Supreme Court presides. A supermajority, that is two-thirds of the vote, is required to remove a President from office. Control of the Senate is currently in the hands of the Republican Party, 53-45, so a vote removing Trump from office looks unlikely at this stage.

And just a reminder…

In the background, the 2020 election carries on. Nineteen democrats are still running for President, clamoring for attention and support as media coverage becomes increasingly crowded with more and more pressing issues. The first primary is on February 3, just 130 days from now.