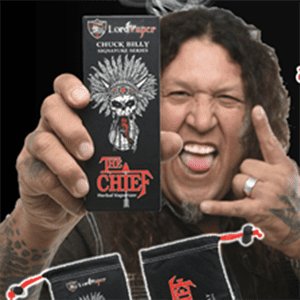 College News sat down with Chuck Billy, the lovable long-locked vocalist of thrash metal band Testament and chatted about The Dark Roots of Thrash Tour II, Testament’s new album and Chuck Billy’s exclusive heavy metal themed vape, called “The Chief”. We also reviewed “The Chief”, which arrived on 4/20 (fate?). Check out the review below the interview.

College News: So Chuck, on the topic of the Dark Roots of Thrash Tour II, what specific Testament albums will you all be bringing to the table?

CN: Cool, so it is safe to assume that the long-time fans of Testament are going to be pretty pumped!

CB: Yeah, it’s not everyday that we get to play some of the songs that we’ve never played at our shows, and some of these longtime fans, and new fans alike, are going to get to hear us play them.

CN: You made a comment in regards to the tour, in that the “stars were finally aligning,” what’s that all about?

CB: Yeah, I’ve been friends with the Exodus guys for so long, and we’re always saying “when are we going to go out and tour,” and it’s like it has never happened. And now, it finally did, our agents got together and we got it to work out. Finally!

CN: Are you (Testament) still working on your new album?

CB: Yeah, we’ve got six demo tracks laid out so far. But we’re still working on it, and trying to get around to it in between tours. We’ll eventually get into the studio and record.

CN: So it’s supposed to be super thrashy, is this old school thrash or heavier, more modern thrash.

CB: No, I mean it is going to be thrashy but melodic as well.

CN: Now, about “The Chief”, your new signature vaporizer from Lord Vaper, how’d that all come together?

CB: Adam Black who owns Lord Vaper, he’s been a Bay Area metal fan from the beginning. But he started out in the adult industry back twenty years ago, he’s a computer guy, but he moved his company more towards the vaporizer industry. But he approached me and said he was looking to do a vaporizer pen that was more oriented towards the metal heads, you know, cause a lot of the vaporizer scene is like Snoop Dog. So being a metal head, he asked me if I were interested in doing a signature series, we tweaked it, and about six months later, we had it. We’ve had it about a month and just launched it.

CB: Yeah, the first 1,000, are in some cool black boxes, and I autographed them and all that. The first 1,000 are going to be unique, because after that, we’re changing the box.

CN: Great, and no coils with this model, no trays, or bowls, is what I’ve read. And it burns hotter as well?

CB: Yep, hotter, and the bitch about vape pens is you’re always losing stuff that goes to it. We’re also coming out with a slim line Chief for wax.

CN: Is there anything else going on that you want to promote.

CB: For the fans, We’re offering VIP packages. Come in, get a one of a kind poster, shirt, photos, and chill with us for an hour. Two bands for the price of one.

CN: Right on, take care Chuck, thanks for your time.

We Review “The Chief”

Usually when a product has a clever name to go along with it, I am already sold, but when it came to “The Chief”, this product also had great capabilities to back up the awesome name.

Design: “The Chief” already gets a 10/10 for design because of how unique and badass it is. A striking red on the front, the real treat is on the back. The back features a grimacing evil-eyed skeleton in a Native American headdress. So much cleverness in one product! As a tattoo connoisseur, I thought of this not only as a cool smoking apparatus, but it also is a pretty cool piece of art. The mouthpiece is flat and fits comfortable on the mouth. It also comes with a few silicon mouthpiece sleeves to avoid catching germs from anyone you may be sharing with. The whole kit comes with the vape, the “medicine bag” pouch, mouthpiece, USB charging cable, mouthpiece screens, a nifty cleaning brush and a manual.

Vaping Quality: First off, most portable vaporizers for dry herbs that are this size are either massive and clunky or the chamber is so small you can’t put that much in. “The Chief” is not clunky at all and fits comfortably in one hand, the loading chamber is fairly deep for a vape of this size. There are three heating settings that you can change by tapping an LED button. The settings are low (365F), medium (400F), high (430F). With some vaporizers I have to set it to the highest setting just to get a good enough vaping session out of it. This vaporizer however, was good at the middle setting and got hot fairly quickly. If you want to turn it to the highest setting, “The Chief” has a safety feature, where it will shut off after 10 minutes. I used it for 10 minutes straight and the vape never got dangerously hot which is a big plus. When I peeked at the herbs, they were still pretty green, so this definitely does a better job at conserving the herbs.

Smell: “The Chief” had very little smell if any at all for those who want to enjoy their herbs without alerting everyone else to what you are indulging in. It is a true vaporizer, as it only produces vapor and no smoke.

Overall: The Chief is a really unique vaporizing pen because of the awesome aesthetic and the really smooth vaping session it produces. If you want to purchase your own special edition (signed by Chuck Billy himself) of “The Chief” head to the website, it is normally $129.00, but it is on sale in honor of 4/20 for $103.20. The sale is only for 2 days though, so don’t miss out!