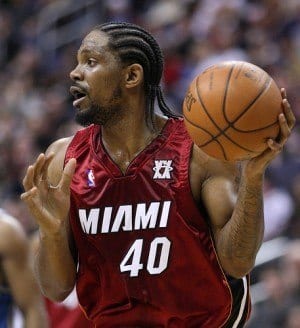 Udonis Haslem will be suspended for game six of the series between the Miami Heat and the Indiana Pacers after delivering a retaliatory blow to Pacers power forward, Tyler Hansborough, in game five of the Eastern Conference semifinal series.

Udonis Haslem was suspended for one game, following his shot to Hansborough’s head in the Pacers 115-83 loss to the Miami Heat, in which the Pacers lost starting forwards Danny Granger and David West to injuries.

The foul that resulted in the suspension occurred in the first half when Hansborough struck Heat superstar Dwayne Wade in the head, opening a cut above his eye. A few moments later, Udonis Haslem committed a retaliatory foul to the head of Hansborough, which was called a flagrant foul by the officials. Tuesday’s game witnessed three flagrant fouls; the series has seen nine technical and flagrant fouls total.

Miami Heat head coach Erik Spoelstra has accused the Pacers of intentionally striking Heat players in the face with hits “of the tomahawk variety.”

Indiana head coach Frank Vogel responded, “In no way, shape or form have I ever suggested that we hit anyone in the head, ever.”

Vogel added, “Hard fouls are part of the playoffs. Fouls to the head have no place in this game, not by us, not by Miami, not by any other team in any other series. With all the concussion research that’s been going on over the last few years it’s a very serious matter and it just doesn’t have any place in the game.”

Miami forward Shane Battier reacted to the Udonis Haslem suspension in stride, “We can’t control it. We know the NBA’s going to do what they feel they need to do and we need to live with the consequences. So it’s really out of our hands, not worth getting riled up.”

The Indiana Pacers will see their playoff stint end tonight if they cannot pull of a win against the Heat.