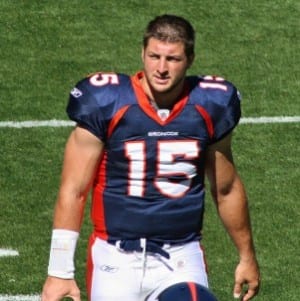 Tim Tebow’s career isn’t over yet. The New England Patriots think he still has some potential in an NFL career.

Tebow signed with the Patriots on Monday. He signed onto the roster as a quarterback, but with Tom Brady as starter and Ryan Mallett as backup, Tebow may not end up playing as a quarterback.

Coach Bill Belichick is known for bringing in controversial players. Randy Moss and Wes Welker owe their success to the chance Belichick gave them. But Belichick is maintaining silence over what could happen with Tim Tebow.

“We’ve already talked enough about him,” he said in an interview with ESPN. “We’ll see how it goes, take it from there.”

Belichick is also quiet about what position Tebow will be playing. He has a love of versatility which he’s shown on multiple occasions, like using wide receivers as defensive backs. That’s likely what drew Belichick to Tebow.

At one time, Tebow was expected to be a star quarterback. Between his strong faith and signature move (“Tebowing”), Tim Tebow had the personality to build a franchise on. Had things worked out a little differently, he might still be the face of the Denver Broncos.

Tebow did well in the 2011 season, leading the Broncos to win the AFC West. But then Peyton Manning went on the market, and the Broncos no longer needed him. Manning came with a huge fan base, where Tebow was just starting to build his.

So the New York Jets took him. But after not doing much as backup to Mark Sanchez, the Jets decided to let him go in April. It looked like no one in the NFL wanted him. Even the Canadian Football Leagues were reluctant to consider him.

This two-year contract with the Patriots is likely Tim Tebow’s last chance to make it in the NFL. Like Belichick said, we’ll see how it goes.