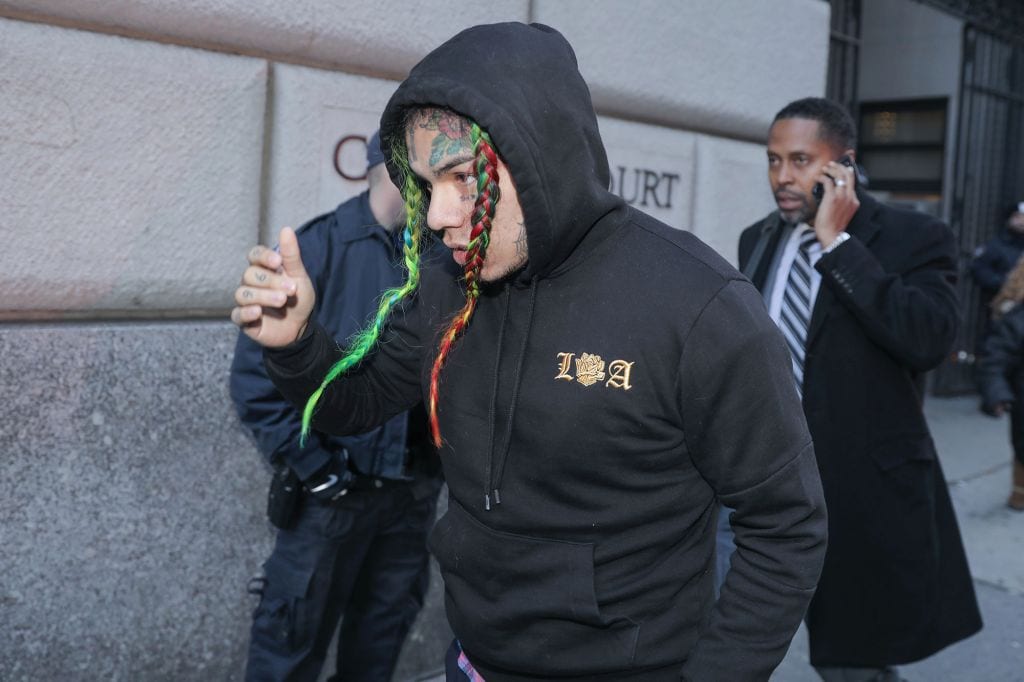 Convicted rapper Tekashi 6ix9ine may be released early from prison as soon as the end of the week. As COVID-19 continues to spread rapidly across the country, those imprisoned are beginning to fear for their safety with being enclosed in a space with over hundreds of people who have the potential to have the virus.

Experts have warned that the prison symptoms could explode with the virus, which has promoted all prison systems to announce that every inmate will be under a 14-day mandated isolation period in order to contain the virus. Celebrity inmates, such as R. Kelly have requested early release in order to avoid exposure to COVID-19.

Tekashi 6ix9ine is considered a medical risk because of his asthma

Last week, Tekashi 6ix9ine made this request with the judge overseeing his case, Judge Engelmayer. His lawyer, Lance Lazzaro, relayed in a statement that Tekashi 6ix9ine was fearful for his health due to being a part of the high-risk group because of his asthma diagnosis. Judge Engelmayer ultimately denied his request, but told him that his lawyer would have to take that up with the Bureau of Prisons.

Lawyer explains why 6ix9ine might get an early release from 0rison very soon pic.twitter.com/QY7LG2IBsN

Bureau of Prisons denied him after judge turnover

On Wednesday, April 1, Inner City Press reported that the Brooklyn-bred rapper was having issues figuring out which establishment would be able grant the early release. Once Tekashi 6ix9ine’s legal team went to the Buereau of Prison’s as suggested by Judge Engelmayer, it was then revealed that he must take it up with the United States Marshals Service due to his status as a witness.

On Wednesday, Lazzaro talked to Complex about the Bureu of Prisons decision and next steps.

“The remedy at that point was to apply to the Bureau of Prisons, which I knew would more than likely deny him,” he explained. “But they had up to 30 days to issue that denial. I kept pushing them to make a decision immediately because, in today’s environment, with the virus spreading in a way that nobody could have imagined, it was imperative to get a quick decision. So the Bureau of Prisons through the general counsel this morning denied my request for compassionate release. That now becomes an appealable decision in front of Judge Engelmayer.”

Judge & government both agree Tekashi 6ix9ine should get early release

Well, Judge Engelmayer seems to be leaning towards his release with a statement that suggests that he plans to let 6ix9ine serve the rest of his sentence at home unless the government has any major obections. However, the government said in their decision that they would not get in the way of Tekashi 6ix9ine being released. “In the event the Court finds ‘extraordinary and compelling reasons’ presented by the defendant’s medical condition, placing him at high risk during the COVID-19 outbreak, the Government does not oppose the defendant’s motion for compassionate relief.”

Update: no 69 order yet by Judge Engelmayer. No way to know what timing is in his mind. I’ve seen the joke about him studying up on memes, and maybe that’s it. Meanwhile, playground across from courthouse has now been locked. Time to write up today’s other cases. https://t.co/pKfOJSz09s

If released, Tekashi 6ix9ine will be on home confinement until the end of his sentence, which was initially set to be early July due to a portion of his time already having been served prior to his sentencing.