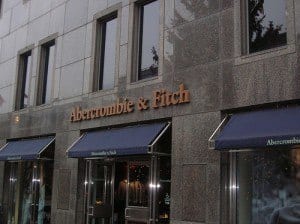 Abercrombie is at it again

It shouldn’t be a surprise that Abercrombie released another ridiculous statement, especially after their CEO said that he didn’t want any of the brand’s clothing to be given away to the homeless.

Now, on top of that, Abercrombie is saying that they banned black clothing. Because it’s too “formal.”

Of course, when it comes to suits and tuxes black is fine. But everywhere else it is a horrendous color.

An employee commented on the exile of black clothing with bewilderment.

“Management will tell people that Mike hates the color, and so we’re not supposed to wear it to work,” the anonymous employee said. “It even applies to coats in the winter.”

Of course, the company offered a thoughtful and genuine response, as usual.

But have no fear—you can still go and get your black clothing from other brands such as American Eagle and H&M, who still supply the dark color.

Even more shocking than the odd exile of the harmless color, the company actually admitted (and was proud of the fact) that they are an exclusive brand. In the day-and-age when people are being seen as beautiful no matter what their jean size, the CEO remains firm in his standards for beauty.

“In every school there are the cool and popular kids, and then there are the not-so-cool kids,” he said to Salon in 2006. “Candidly, we go after the cool kids. We go after the attractive all-American kid with a great attitude and a lot of friends. A lot of people don’t belong [in our clothes], and they can’t belong. Are we exclusionary? Absolutely.”

Well, God forbid that the store will dim their lights any lower, or else that could be considered black.